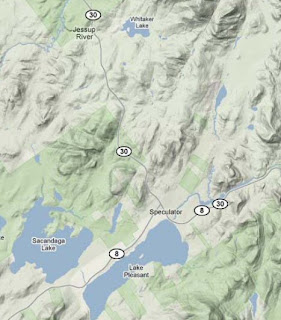 In late 1928, the life of an Adirondack guide came to an unfortunate, premature end. Like many of his brethren who died from accidental shootings over the years, the victim succumbed to the effects of a serious gunshot wound. But the demise of Eula Davis was no accident. Clearly, this was a case of murder, and the beginning of a twisted saga that kept all eyes glued on the Lake Pleasant region for some time.

The story began on November 30 when local handyman and guide Ernest Duane, 34, reported to police in Speculator that he had found Davis, 60 (also a handyman and guide), dead. The body was located in the Ernest Brooks cabin on Whitaker Lake, several miles northwest of Speculator village. Duane offered to accompany lawmen to the site, but they opted to investigate on their own, a decision that would prove critical as the case developed.

A sad scene awaited them. Davis’ corpse was found frozen solid- apparently, he had died of exposure and/or loss of blood. A gaping bullet-wound in the lower back was the overriding cause, and Davis had not died easily. Unable to rise after being shot, he had dragged himself across the floor. His body was partially covered with a quilt, and a pillow had been drawn close to Eula’s head, signifying an attempt to keep warm and somewhat comfortable. He had used rags to form a rough tourniquet, and had broken a pencil tip while trying to write a note.

Davis had many friends in Speculator, and they began searching for the killer while police worked to develop certain clues. Within a few days, the focus was on one suspect: Ernest Duane.

An autopsy had uncovered bits of paper money embedded in the body, revealing that Davis’ wallet had not been empty prior to the shooting. Finding the damaged money would surely lead to the killer. But why would Duane kill a popular local man known to be his friend?

Davis, said to have guided for boxing champion Gene Tunney several months earlier, had done quite well financially. It was public knowledge that he had earned several hundred dollars, and had recently purchased winter provisions in town. Questioning of local merchants yielded critical information: in the past few days, someone else had been shopping. Among the legal tender used for payment was a $10 bill with two neat holes in it. The customer was Ernest Duane.

He was brought in for questioning, and after being confronted with evidence, Duane finally confessed to the crime. He offered a lengthy tale, including the decision to rob the old man, who was deaf. When Duane entered the cabin and saw Davis facing away from the door, he shot him in the back. He then took the old man’s wallet and headed for home. On the way, Duane said, he removed only one bill and then flung the wallet into the woods.

Since the empty wallet had already been found in Davis’ pocket, police knew Duane was lying. (He really didn’t seem to have had much of a plan. Why admit the shooting but lie about the robbery?) At any rate, a search crew with rakes went to Whitaker Lake in hopes of finding the missing cash buried beneath new-fallen snow. They found nothing.

The next day, police returned to take evidence photographs of the crime scene—but it was gone! That’s right—the entire crime scene was no more. In one of those great Adirondack mysteries, the remote cabin had burned overnight. Arson by Duane’s sympathizers seemed the only plausible explanation.

A day later, Ernest told police where the money was hidden, admitting he had emptied the wallet and placed it back in the victim’s pocket. In Duane’s woodshed they located a roll of bills, pierced by what appeared to be bullet holes. Employing a bit of trickery, police told him the money hadn’t been found, so Ernest provided written directions. The successful ruse created physical evidence that might later prove valuable.

Police also discovered that Duane owed $200 in fines for game law violations. With a motive and a confession, they now had what appeared to be an open-and-shut case.

But appearances can be deceiving. Still, Duane would go on trial, though under unusual circumstances. Neither the Hamilton County district attorney nor the county judge were lawyers. That unprecedented situation was addressed by Governor Al Smith, who appointed a special prosecutor and assigned a judge. In the meantime, Duane enjoyed cowboy novels in his cell and visits from his new bride, a 14-year-old that he married only a month before the Davis murder.

The prosecution played a powerful hand in the trial, led by impressive witnesses. Doctors dismissed Duane’s epilepsy as a non-factor, and Leonard Egelston, a police officer, introduced some surprising evidence. Early in the investigation, he had taken photographs inside and outside of the cabin. The apparent arson was, as it turned out, a futile attempt to destroy evidence.

The prosecution also offered Duane’s signed confession, along with the note directing officers to the hidden stash of bills. The note was presented as proof that Duane was sane and clear-headed enough after the murder to hide the stolen money and remember where it was hidden.

Next week, the conclusion: The remarkable “dream defense,” and the Duane family’s criminal past.