We’ve all heard of Woodstock at one time or another—that famous (or infamous) concert held in August 1969. It was scheduled at different venues, but the final location was actually in Bethel, New York, about 60 miles from Woodstock. For many who lived through three major homeland assassinations, the Vietnam War, and the racial riots of the turbulent 1960s, Woodstock was an event representing peace, love, and freedom. It’s considered a defining moment of that generation, and a great memory for those who attended (estimated at 400,000).

Many subsequent concerts were planned, though most never came to fruition. What few people know is that one of the major follow-up concerts to Woodstock was scheduled for just nine months later, and the location was in the North Country, near a tiny community known as Churubusco. Signed to appear were many top acts of the day, including Chuck Berry, Steppenwolf, Bo Diddley, Grand Funk Railroad, Richie Havens, 3 Dog Night, Judy Collins, Sly and the Family Stone, B. B. King, and Canned Heat.

In spring 1970, a company called Fest-I-Rama announced that the three-day Churubusco Live-In would be held on Memorial Day weekend. Similar events were planned at the same venue for the Fourth of July and Labor Day. The complete story of the controversial event occupies a full chapter of one of my earlier books, History of Churubusco. With subtitle, it’s History of Churubusco and the Town of Clinton, Clinton County, New York (to avoid confusion with well-known Churubuscos in Indiana and Mexico).

Churubusco is a tiny, square-shaped settlement only a quarter-mile long on each side. It was named after a historic battle fought in 1847 during the US-Mexican War, and is located in the northwest corner of Clinton County. Amidst farmer’s fields and plenty of forest, the setting is remote, and that’s one of the reasons it was chosen to host a major rock concert. The entire town encompasses nearly 70 square miles, but is home to only around 700 residents.

The history of this tiny village and the agrarian town of Clinton is truly remarkable. One citizen became lieutenant governor of New York, served for years as a top state politician, and at one time was FDR’s closest advisor. Another was one of the founders of the city of Seattle and the state of Washington, and is highly honored there. And there were the famed “monks of Churubusco,” who actually have their own pope on the international stage. Many other very surprising details led me to the realization that the town’s amazing history should be recorded. 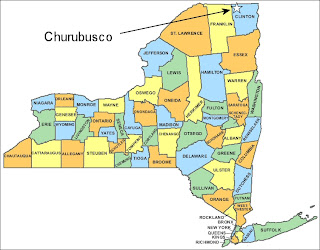 Among my favorite stories connected to Churubusco is the proposed rock concert. At the time the Live-In was announced, I was 16 years old and sometimes dreaded the trips (nearly every weekend) from Champlain to Churubusco to visit relatives. (My mom, now 91, was born there, and that’s where she and my dad, 88, met in the 1930s.)

There’s not much to do in Churubusco, and a day in the remote countryside was not exactly heaven for a teenager. But heaven arrived in early 1970. A huge rock concert, and with one of my favorite groups (Steppenwolf), was incredibly, impossibly, coming to Churubusco. Better than that, the venue was located across the road from my grandfather’s 100-acre farm. This was fantastic!

Well, fantastic for teenagers, maybe, but not so much for Churubusco or Clinton County. The call to arms went out, and that can just about be taken literally. During the battle to stop the event, attorney and local legend J. Byron O’Connell issued this statement: “That Live-In will turn into a lynch-in. People up here aren’t used to long hair. They don’t fool around with legal niceties, and they’re not going to put up with any nonsense from college kids. If they come up Rt. 189, they’re just liable to get shot.”

Next week, the conclusion: A quarter-million fans expected, but trouble looms.