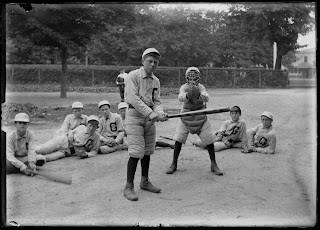 The remarkable images, many of which have never been exhibited, are just some of the gems in the Society for the Preservation of Long Island Antiquities (SPLIA) collections and feature the work of such turn of the 20th century photographers as Clarence A. Purchase, Arthur S. Greene and Harry R. Gelwicks.

Although the people and fashions have changed, many of the activities remain surprisingly the same. We see bathing beauties on the North Shore, parents meeting with the principal of a Brooklyn school, a Memorial Day parade in Jamaica, a Boy Scout troop preparing a meal at their campground and kids ice skating on an East Norwich pond.

Then, as now, transportation options were also important both for workers and for those pursuing leisure activities. A gentleman, with his golf bag, waits at the dock for the arrival of the Greenwich/Oyster Bay ferry in Bayville, steam engine stops at the Port Jefferson station and a dirigible, almost out of fuel, makes a safe landing in Mineola.

The exhibit was organized by guest curator Lynn Stowell Pearson and SPLIA Director Robert B. MacKay in memory of Huyler C. Held, through whose efforts the Society acquired its first photograph collection by Purchase in 1965 and its most recent by Greene in 2011.

Thomas Palmer scanned the images that appear in the exhibit from the original glass plates and period photographs. The images were produced by iolabs, Inc. of Pawtucket, Rhode Island and are mounted on foam core board. Charles Gabeler was the graphic artist for the text panels, captions and outdoor banner. Margie Burkett, Assistant Director for Public Affairs, and Alan Tewksbury, Facilities Manager, were involved in the promotion and installation of the exhibit, respectively.

The exhibit will be on view through January 2013, Thursdays through Sundays 11am until 4pm.

Photo: The “G”s believed to be a Queens or North Hempstead baseball team. Photo by Harry R. Gelwicks about 1910.