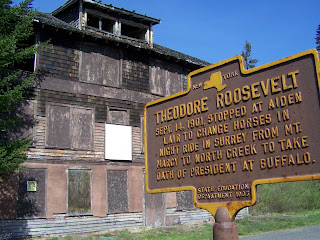 As part of that effort he periodically posts photographs he has taken of the more than 70,000 abandoned buildings in his city. Such images included (as reported in the New York Times) &#8220&#8216-feral’ houses almost completely overgrown with vegetation- a decommissioned public-school book depository in which trees were growing out of the piles of rotting textbooks&#8221. The term has become a familiar one in the city not without some misgivings by the locals as they watch tourists take souvenirs of their city back home.

New York is home to ruins but as to their tourist potential, that is another matter. For example, the book Hudson Valley Ruins by Thomas E. Rinaldi and Robert J. Yasinsac catalogs industrial and residential ruins along the Hudson River. Recently on a dark and stormy night Yasinsac, spoke on the demolition of the Shea and Yankee stadiums complete with pictures documenting the destructions of these modern coliseums.

Sandy brought ruin porn closer to home. In fact, it brought tourists to the homes of people in Staten Island and other portions of the coastal area hard hit by the storm. After the storm subsided, people with electricity in their own homes became day-time tourists in the areas which did not and which had been devastated by the storm. The collapsed homes had become macabre tourist sites since the homes did not belong to people long since dead for centuries or millennia but to living people struggling to get their lives back together. And since there is no place like home, to have one’s home destroyed rips the heart and soul of the people who once lived there never to be able to restore what once was.