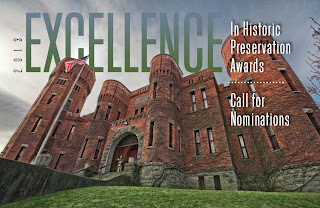 The postmark deadline for nominations is February 14, 2013. The awards will be presented during the Preservation League’s Annual Meeting on May 15, 2013 in New York City at the historic New York Yacht Club.

&#8220Preservation and reuse of our historic buildings is fundamental to the economic revitalization of our cities, towns, and villages,&#8221 said Jay DiLorenzo, President of the Preservation League. &#8220The restoration of our historic neighborhoods, Main Streets, and underutilized buildings continues to create jobs, provide housing, promote tourism, stimulate private investment, and conserve energy, resources, and open space. Our annual Awards program allows us to highlight projects that could one day provide new examples of best practices in historic preservation.&#8221

Illustration: The Amsterdam Armory, a 2012 Excellence in Preservation Award recipient.