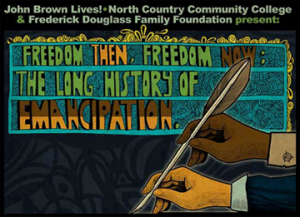 On Friday 30 November and Saturday 1 December, modern-day abolitionists will gather with students, teachers and the general public concerned about human freedom and human trafficking at various venues in Saranac Lake and Lake Placid. Activities will include an art exhibition, a screening of the popular Civil War film Glory, workshops, lectures, and a closing reception following historian David Blight’s keynote address on Saturday night. (Full schedule follows.)

When Abraham Lincoln issued the Emancipation Proclamation in the throes of the Civil War, he undoubtedly believed that it would sound the death knell for slavery. However, there are approximately 15,000 documented cases of modern day slavery and human trafficking in the United States today and 27 million people enslaved worldwide.

Kenneth J. Morris, Jr., the great-great-great grandson of abolitionist Frederick Douglass, returns to the North Country on November 30-December 1 to continue in Douglass’ footsteps to end slavery once and for all.

Through his work with the Frederick Douglass Family Foundation, Morris has inspired students across the country to produce a New Proclamation of Freedom for the 21st century. He will meet with students and educators on Friday 30 November at North Country Community College and then again on Saturday 1 December at a day-long seminar open to the public being held at Heaven Hill Farm in Lake Placid.

Over the course of Emancipation Weekend, Morris will talk about slavery in Douglass’ time and today, and encourage audiences, especially students and teachers, to gather signatures for the New Proclamation of Freedom. The thousands of signatures collected across the country will be delivered to Washington, D.C., on January 1, 2013—the 150th anniversary of Lincoln’s Emancipation Proclamation—to encourage the U.S. Department of Education to make Human Trafficking Education a priority for U.S. public schools.

Artist Robert Shetterly’s portraits of Lincoln, Douglass, John Brown, Sojourner Truth, Harriet Tubman, and other 19th century leaders will be on display throughout the weekend along with a facsimile of Lincoln’s first Emancipation Proclamation on loan from the New York State Library’s Manuscript and Special Collections Division.

Among the other participants and events are: writer Amy Godine on Adirondackers with roots in anti-slavery and civil rights movements- an exhibition of artist Robert Shetterly’s portraits of Americans Who Tell the Truth- a screening of the popular Civil War film, Glory, at The Palace Theater in Lake Placid, in conjunction with the Adirondack Film Society- a lecture on women and emancipation by Dr. Margaret Washington, Sojourner Truth biographer and Cornell University Professor of History- and a keynote address by historian David Blight on the historical memory of the Civil War and emancipation.

All Freedom Then, Freedom Now events are open to the public.

9:30 am Registration and Refreshments

10:00 am Amy Godine, independent scholar and writer, on champions of racial justice and civil rights with Adirondack roots

10:45 am Rob Shetterly, portrait artist, on Americans who have safeguarded democracy and promoted the common good

A Evening of Glory—Screening and Discussion

A Day for Educators, Artists, Librarians, and all concerned with history and justice!

9:00 am Registration and Welcome

9:30 am Gloria J. Browne-Marshall, Associate Professor of Constitutional Law at John Jay College, on how racial in-justice permeated the founding American documents and the interpretation by the US Supreme Court

10:45 am Margaret Washington, Professor of History at Cornell University and Sojourner Truth biographer, on women in the struggle for emancipation

Kevin Levin, Civil War Memory blogger and history teacher on the continued popularity of the movie Glory and using it as a tool to engage students and the general public about emancipation

Rob Shetterly, portrait artist, on using Americans Who Tell the Truth portraits and curriculum to inform and excite students about their roles as citizens in a democracy

2:00 pm Kenneth Morris, Jr., President of the Frederick Douglass Family Foundation, on using the 100 Days to Freedom curriculum to bring human trafficking education and service-learning opportunities into classrooms and schools

3:45 pm Franny Nudelman, Associate Professor at Carleton University, on techniques and resources for emancipating our textbooks

7:30 pm David Blight, Director of the Gilder Lehrman Center for the Study of Slavery, Resistance and Abolition at Yale University, on The Historical Memory of the Civil War and Emancipation at 150

2 thoughts on “Emancipation Weekend in the Adirondacks”