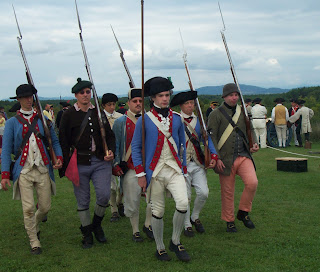 This Saturday and Sunday, September 15-16, Saratoga National Historical Park, located on Routes 32 and 4 in Stillwater, will present an 18th century living history encampment marking the 235th anniversary of the what’s been called the world’s “most important battle of the last 1,000 years.”  Camps will be open Saturday from 11:00 AM to 4:00 PM, and on Sunday from 11:00 AM to 3:00 PM.

This two-day encampment will surround visitors with the sights, smells, and sounds of military camp life from the American Revolution.

Dozens of re-enactors portray American and British officers, soldiers, cavalry troops, and camp followers from the Battles of Saratoga.  See cavalry charge, join in a court-martial and decide the soldier’s fate, take part in a musket drill, follow along with a scouting party, or listen to stories of the revolutionary war experience.  Feel the thunderous roar of cannons, smell the acrid smoke of musket fire as well as the welcoming wisps of camp cooking fires.

On Sunday, there will be a 2:00 PM Wreath Laying Ceremony by Sons of the American Revolution and Daughters of the American Revolution at Tour Road Stop 2.  The public is welcome to attend this commemorative wreath laying. The event is free, but the normal entrance fee to the park of $5 per car and $3 per hiker or cyclist (good for one week entry) is charged.  For more information about this or other events, please call the Visitor Center at 518-664-9821 ext.1777, check the park website at www.nps.gov/sara or follow them on Facebook at www.facebook.com/saratoganhp