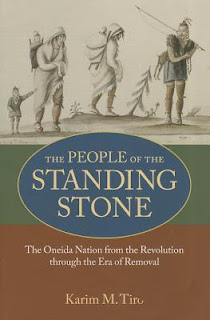 Karim M. Tiro’s The People of the Standing Stone: The Oneida Nation From Revolution Through the Era of Removal (Univ. of Mass. Press, 2011) traces the history of the Oneida’s experiences from the American Revolution to the mid-nineteenth century.

Between 1765 and 1845, the Oneida Indian Nation weathered a trio of traumas: war, dispossession, and division. During the American War of Independence, the Oneidas became the revolutionaries most important Indian allies. They undertook a difficult balancing act, helping the patriots while trying to avoid harming their Iroquois brethren.

Despite the Oneidas wartime service, they were dispossessed of nearly all their lands through treaties with the state of New York. In eighty years the Oneidas had gone from being an autonomous, powerful people in their ancestral homeland to being residents of disparate, politically exclusive reservation communities separated by up to nine hundred miles and completely surrounded by non-Indians.

The Oneidas physical, political, and emotional division persists to this day. Even for those who stayed put, their world changed more in cultural, ecological, and demographic terms than at any time before or since. Oneidas of the post-Revolutionary decades were reluctant pioneers, undertaking more of the adaptations to colonized life than any other generation. Amid such wrenching change, maintaining continuity was itself a creative challenge. The story of that extraordinary endurance lies at the heart of this book. Additional materials, including teaching resources, are available online.

The author specializes in North America from the 16th through the mid-­19th centuries. He is also the author of Along the Hudson and Mohawk: The 1790 Journey of Count Paolo Andreani (University of Pennsylvania Press, 2006). Tiro is an Associate Professor of History at Xavier University and is currently researching the history of the United States sugar industry.