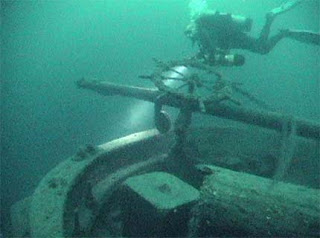 · “Between Two Nations: The British on Carleton Island (Fort Haldimand) from the American Revolution to the War of 1812” with Douglas J. Pippin, Ph.D., historical archaeology professor at SUNY Oswego

· Underwater explorer Jim Kennard on his “Discovery of the HMS Ontario” using deepwater sonar scanning to find the 80-foot-long, 22-gun sloop-of-war that sunk in 1780 in Lake Ontario on her way to Fort Haldimand

This Great Lakes Underwater theme program makes the start of a new Great Lakes Seaway Trail Byway-Blueway Seminar Series. Pre-registration is requested by September 3. Tickets are $10 for adults, $8 for seniors age 62 or older and retired military with ID, $5 for children under 14, and free Blue Star admission for active military with ID. Day of the event seating is $15 for any remaining seats. This is a Yellow Ribbon event. For more information and to register, visit www.seawaytrail.com/dive or call 315-646-1000 x203.
Robert “Bob” Hamilton is a meteorologist with the National Weather Service at Buffalo, NY. He is noted for presenting his research of the meteorological conditions that have impacted historic events, including shipwrecks. He presented his study of the weather influencing the time of the foundering of the HMS Ontario at the spring 2012 Great Lakes Meteorological Operational Workshop in Chicago.

Douglas J. Pippin is an historical archaeologist who has studied the provisioning and frontier economy of the British military and displaced Loyalists during the American Revolution. He had conducted fieldwork at Fort Haldimand and at Loyalist settlements in the Exuma Islands in the Bahamas. He received his doctoral degree at Syracuse University.

Jim Kennard, known as “the Jacques Cousteau of the Great Lakes Seaway Trail,” has been featured in such publications National Geographic and Sea Technology magazines for the 200-plus rare and historic shipwrecks he has discovered in numerous waters in his 40-year career. The HMS Ontario is considered an “underwater Holy Grail.”