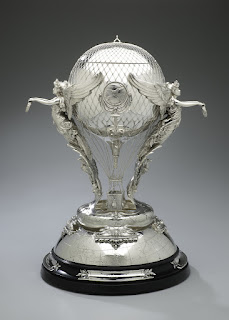 The pharaohs commissioned their pyramids, the wealthy and powerful today emblazon their names on buildings, philanthropies and great estates. But in earlier times in America, a convenient way to stamp your ambitions and achievements in the permanent record was to call on the silversmith.

The silver collection at the New-York Historical Society has taste, ornament, style, luxury, sparkle – and permanence. But it also has some quirky and memorable tales associated with its dazzling objects. The exhibition Stories in Sterling showcases some outstanding pieces, with richly detailed annotations in the accompanying catalog by curators Margaret K. Hofer and Debra Schmidt Bach.

Many of these outstanding pieces came directly to the Society from the families that had originally commissioned them, so they come deeply embedded in story. Documents, portraits and the texture of life are richly displayed alongside the rich heirlooms in the exhibition. (Full disclosure: I used to work at the N-YHS and am familiar with some of these items).

A handsome example is silversmith Benjamin Wynkoop’s brandywine bowl from around 1700 which descended through six generations of the Dutch dePeyster family. These bowls were used to celebrate the birth of a child: usually the mother and her relatives sipped a potent brew of spiced brand with raisins from the two-handled cup, while eating cakes in a feast usually held ten days after the birth. Notice the tulip motif, a tipoff to Dutch lineage.

Some items tell a dark story beneath the shiny surfaces. A coffeepot from Jamaica is a reminder of how the Triangle trade of slave, sugar, rum connected colonial British North America to England and to Africa. The elegant coffeepot was made in Jamaica by Abraham le Francois, a French Huguenot or possibly Jewish silversmith of London, who was later active in that sugar colony island. Wealthy planters lived a luxurious lifestyle and imitated the customs of fashionable London, including its tea and coffee-drinking rituals.

A description of life in Port Royal the principal town of Jamaica in 1683 suggests the casual opulence that prevailed: “…Almost every house hath a rich Cupboard of Plate which they carelessly expose, scarce shutting their doors in the night, being in no apprehension of thieves for want of receivers.” The crown-appointed Governor of the Island had the right to install an assay master to regulate the quality of gold and silver. Silver and gold smiths who passed these assay tests earned the right to stamp their wares with an alligator’s head up until 1765, and this tall coffeepot has the alligator’s head assay mark on its underside, near the initials ALF.

Sometimes the items are less elegant but have considerable resonance. I was intrigued to learn that silver brooches were produced for the Indian trade in quantities as large as 16,000 after the American Revolution. The Montreal silversmith Robert Cruikshank produced brooches, crosses, buckles, gorgets and ear bobs en masse for factors of the Hudson Bay Company and other traders. One such item decorated with hearts was worn by a Seneca woman in upstate New York and was later given to a missionary who lived on the Seneca reservation long enough to be given the Iroquois name “Blue Sky.”

A teapot made as a wedding gift in 17th century, from either Albany or Watervliet, testifies to the early era of tea drinking when the beverage was still costly enough to be consumed amidst elaborate rituals. The maker, a Rensselaer and the recipient, a Schuyler, were among the largest patroon families of the Hudson Valley, who controlled vast tracts of land along both sides of the River. Pear-shaped, the teapot echoed the forms of a Chinese wine pot. 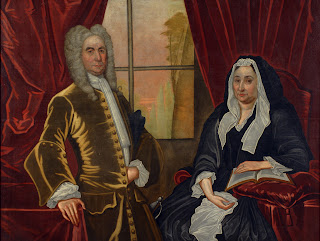 Kiliaen van Rensselaer made the impressive vessel for the union of his relatives, Johannes and Elizabeth Schuyler, and it features a marriage chaplet and the Schuyler family coat of arms. Such ornaments remind us of the dynastic features of marriage, the expectation of permanence and the associations of presentation silver with traditions of inheritance and property. A portrait of the married couple, painted some thirty years after the teapot indicates the marriage was enduring.

A more oddball item is a hot air balloon trophy awarded in 1907 to stockbroker Alan R. Hawley for piloting a balloon on a record-breaking journey from St. Louis to the province of Quebec. He claimed the trophy at a grand dinner of the Aero Club which also counted the Wright Brothers among its members. The trophy is modeled on a loving cup but features a hot air balloon embraced by the wings of two allegorical victory figures, with a charming basket suspended underneath complete with sandbag weights. Hawley’s scrapbook, also on display, has the menu from the evening’s ceremony which suggests how comfortable these early aviation and automobile enthusiasts felt in their tuxedos.

Some of the stories document political and social tensions, rather than the agreeable rituals of praise and commemoration. Henry Eckford distinguished himself in the War of 1812 as the master shipbuilder who rapidly constructed the Great Lakes fleet that allowed Oliver Hazard Perry to defeat the British in the region and control the critical water routes to the northwest.

By the 1820s, he was a successful New York financier, perhaps too successful – since he became the target of investigations into public fraud when some companies failed. Ultimately his name was cleared and his supporters commissioned a handsome vase for him, leaving a solid silver rejoinder to his critics. But that annoyed Eckford’s critics who rallied around New York’s District Attorney, Hugh Maxwell, who had led the prosecution. So Maxwell too, was awarded a large and ornate silver vase, commissioned from Baldwin Gardiner, the same company that created Eckford’s vase.

The exhibition closes on September 30. For browsers of the past who never thought to cast an eye over the silver, this is a fun and unusual excursion through the trail of stories that material culture strews in its path. It made me want to grab one of those delightful little lobster picks and spear a few more anecdotes for the road myself.