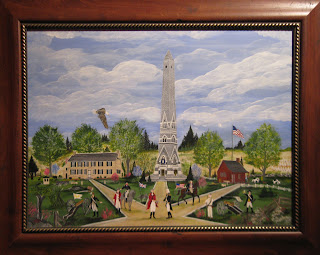 Local folk artist Richard Salls of Schuylerville has donated the original oil painting “225” to Saratoga National Park in Stillwater. “225” was originally unveiled in 2002 to commemorate the 225th anniversary year of the Battles of Saratoga and the 125th year of the Saratoga Monument.

This work of art commemorates the surrender of British General John Burgoyne to American General Horatio Gates after the 1777 Battles of Saratoga &#8211 an event known as the Turning Point of America’s Revolutionary War. The village of Schuylerville, formerly Saratoga, is the site of the surrender. Salls, a long-time resident of Schuylerville, is no stranger to the rich history in the area. The painting features the historic sites of the Schuyler House, Saratoga Monument and Neilson House, very familiar places to Salls.

The original painting will be on display at the park’s visitor center through September. Prints of the painting are available in the park’s gift store which features books, glassware, souvenirs, and other quality items about the Battles of Saratoga and the Revolutionary War. Further information about the artist is available at: www.saratogafolkart.com.

For more information about this or upcoming events at Saratoga National Historical Park, the National Park in your backyard, call the Visitor Center at 518-664-9821 ext. 1777 or check the park website at www.nps.gov/sara or Facebook page at: www.facebook.com/saratoganhp.