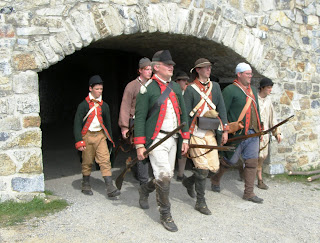 Visitors can explore the Continental Army’s first major initiative during the Revolutionary War at Fort Ticonderoga’s upcoming living history weekend “Onward to Canada: Reinforcements Head North to Join the Attack on St. John.” The September 1-2 event will recreate how the American army prepared to invade Canada in the fall of 1775.

Special programming offered throughout the weekend will recreate a unique and busy moment in Fort Ticonderoga’s history when the “Old French Fort” served as hub of activity for the fledging American Army and a launching point for an invasion into Canada. Programs will highlight close-order marching- the issuing of muskets, supplies, and clothing to the troops- special tours, weapons demonstrations- and regimental training exercises.

The objective of the invasion of Canada was to gain military control of the British province of Quebec, and convince the French-speaking Canadians to join the Revolution on the side of the thirteen American colonies. In the fall of 1775 two invasion forces were launched with the goal of meeting in Quebec. One expedition under the command of Brigadier-General Richard Montgomery set out from Fort Ticonderoga, besieged and captured Fort St. John, and very nearly captured British General Guy Carleton when taking Montreal. The other expedition left Cambridge, Massachusetts, under Colonel Benedict Arnold, and traveled with great difficulty through the wilderness of Maine to Quebec City. The two forces joined there, but were defeated at the Battle of Quebec in December 1775.

“Visitors can watch as Colonel Seth Warner’s Green Mountain Boys are transformed from recruits into a regiment to join Brigadier-General Richard Montgomery’s invasion of Canada. Learn about the practical concerns of getting soldiers and supplies to the front lines during a military campaign in a land of expansive lakes and dense woods. See bateaux in action as they move men and materiel to and from Fort Ticonderoga as we celebrate 1775 and Vermont’s military history,” said Stuart Lilie, Fort Ticonderoga’s Director of Interpretation. “The event will explore how new soldiers learned to move, think, and fight together as a team as they evolved into disciplined soldiers committed to defending the fledgling cause of liberty.”

Admission to “Onward to Canada” is included with Fort Ticonderoga’s general admission ticket. Fort Ticonderoga is open from 9:30 am until 5 pm daily. A complete event schedule is available online.