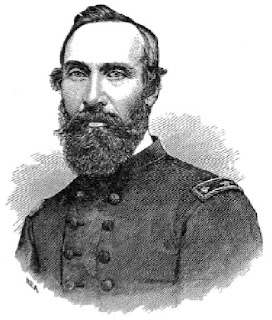 Shooting the horse of a Confederate officer convinced the rebel force which vastly outnumbered him to surrender to 1st Lt. John T. Rutherford from Waddington, St. Lawrence County, NY. Two weeks earlier, Rutherford, in command of the 9th New York Cavalry, led a successful charge that captured 90 Confederate soldiers at Yellow Tavern, VA on May 12, 1864.

Rutherford is just one of the Congressional Medal of Honor Winners from Northern New York highlighted in the traveling exhibit Hometown Heroes on display through September 15th at the St. Lawrence County Historical Association at the Silas Wright House, 3 East Main St., Canton.

The Congressional Medal of Honor was created by President Abraham Lincoln “For Conspicuous Gallantry and Intrepidity in Action At the Risk of Life Above and Beyond the Call of Duty,” and is the United States’ highest military decoration. At least 45 Medal of Honor winners have been associated with St. Lawrence, Jefferson, and Oswego Counties. Since its establishment 150 years ago there have been fewer than 3,500 recipients of the Medal of Honor, and one in four of the recipients are from New York State.

The 15 Hometown Heroes depicted in the traveling exhibit include soldiers from the Civil War through Afghanistan, and the only woman ever to receive the Congressional Medal of Honor. Dr. Mary Walker Edwards served during the Civil War as the Army’s first female surgeon. Dr. Walker was from Oswego and worked in an Army hospital in Washington, and later as a field surgeon on the front lines. She was captured by Confederate forces and imprisoned for four months.

The SLCHA Gift Shop is a great way to learn about other heroes of the Civil War. Books include Harriet Tubman: Conductor on the Underground Railroad, Young Heroes of the Civil War, and Isaac Johnson: From Slave to Stonecutter. SLCHA members receive a 10% discount on these books and most other items in the gift shop.

The St. Lawrence County Historical Association at the Silas Wright House is open Tuesday through Saturday noon to 4 p.m., Friday noon to 8 p.m. Admission to the museum is free- admission to the archives is free for members and children, $2.50 for college students, and $5 for the general public. The St. Lawrence County Historical Association is located at 3 E. Main St., Canton. Parking is available in back of the SLCHA, next to the museum’s main entrance.

Note: This traveling exhibit was created by the office of New York State Senator Patty Ritchie, 48th Senate District. On September 1st and 2nd the exhibit will be at the St. Lawrence Power and Equipment Museum, Madrid for the weekend. It will then return to the SLCHA through September 15th.