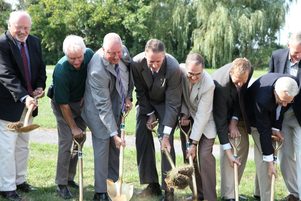 Lieutenant Governor Robert Duffy joined local officials recently to break ground on the Finger Lakes Museum, a new educational and cultural center that will be located on the Discovery Campus in Branchport, along Keuka Lake.

The project was identified by the Finger Lakes Regional Economic Development Council as a priority project in 2011 and was awarded $2.3 million to support the renovation of the former Branchport Elementary School into a historical center highlighting the Finger Lakes region.

&#8220The Finger Lakes Museum is a transformational project that will create much-needed jobs and provide a significant boost for the tourism industry and local-area businesses,&#8221 said Lieutenant Governor Robert J. Duffy.

The Discovery Campus is the first of a two phase multimillion dollar indoor/outdoor natural and cultural complex highlighting the Finger Lakes region. The project is sponsored by The Finger Lakes Museum and will create and retain 100 direct jobs at the Museum, create 330 construction jobs, and generate an estimated $12 to $15 million annually in the region through increased tourism, which will spur local economic activity with area businesses and benefit the surrounding communities.

&#8220The Finger Lakes Museum’s Business Plan sets forth a series of small steps leading to the creation of a premier educational institution with goals of stewardship, entertainment and regional economic health,&#8221 said Don Naetzker, Executive Director of the Finger Lakes Museum. &#8220Establishing the Museum’s Discovery Campus in the quintessential Finger Lakes hamlet of Branchport is a satisfying first step in ensuring the future of this pristine region for generations to come.&#8221

Last year, a total of $785 million was awarded through the Consolidated Funding Application (CFA) for job creation and community development projects consistent with each region’s strategic plans. The Museum was awarded funding from three state agencies, including $1.5 million from Empire State Development (ESD), $400,000 from New York State Office of Parks Recreation & Historic Preservation (OPRHP) and $381,000 from the Environmental Facilities Corporation (EFC).

Kenneth Adams, President, CEO & Commissioner of Empire State Development said, &#8220This is great news for the Finger Lakes region, as this project creates much-needed jobs and will boost the region’s tourism industry, which will generate significant economic activity and help foster growth for local businesses.&#8221

ESD’s $1.5 million will help to offset the costs of acquiring and renovating the Branchport Elementary School site and the construction of the Discovery Campus. EFC’s Green Innovation Grant Program will create an innovative and interpretive storm water management system, including a porous pavement parking lot which will absorb rainwater and reduce the runoff of polluted water into Sugar Creek. A rain-absorbing &#8220green roof&#8221 and eco-friendly bio-filters will further treat storm water runoff, stream banks along the creek will be restored and protected, and OPRHP’s resources will be used to increase public access to the waterways at the Discovery Campus including the creation of a waterfront program center and a hand-carry boat launch.

In May, final design plans and a virtual tour of the exterior and interior improvements of the Discovery Campus were unveiled and can be seen online at The Finger Lakes Museum’s website.