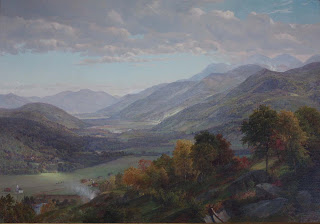 The Adirondack Museum announces a significant addition to the permanent collection. The painting, Adirondack Landscape [Elizabethtown], 1864, by William Trost Richards (1833-1905), is a gift of the estate of Waldo Hutchins III. The painting is on exhibit in the Lynn H. Boillot Art Galleries for the 2012 season.

William Trost Richards was an influential painter of the American landscape, associated with the Hudson River School of Painting and the American Pre-Raphaelite movement. His works are represented in the in the collections of the Metropolitan Museum of Art, the National Gallery, the Museum of Fine Arts in Boston, the Philadelphia Museum of Art, as well as other major museums across the United States.

The Adirondack Museum has displayed the 1864 painting before, as part of its 2002 exhibition &#8220In Search of a National Landscape.&#8221 William Trost Richards was one of the most important artists to visit and document the Adirondacks. He first came to the region in 1855, and his Adirondack paintings became a critical part of the definition of wild landscape as an expression of American identity during the early 19th century.

Adirondack Landscape will join another Richards painting in the Adirondack Museum’s collection, In the Adirondacks, 1857, as well as a sketch of the Indian Pass, 1855. The Hutchins bequest is an important addition to the collection documenting Adirondack landscape, American attitudes about wilderness, and the work of a prominent 19th century American artist.

&#8220The Adirondack Museum is grateful for Mr. Waldo Hutchins’ bequest of this important piece to our collection,&#8221 said Chief Curator, Laura Rice. &#8220We are happy to be able to share it as part of the Adirondack story for years to come.&#8221

Waldo Hutchins III, long time Adirondack summer resident and former Adirondack Trail Improvement Society Director passed away on February 7, 2012. He started visiting the region with his parents in the late 1930s and maintained a lifelong love of the Adirondacks.