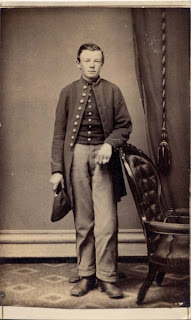 One hundred fifty years ago this country was torn apart by a great civil war. The Adirondack Museum will host a weekend dedicated to remembering the Civil War in the Adirondacks, the men who fought it and their loved ones at home, this Saturday, July 21 and Sunday, July 22.

In the Adirondacks many young men, boys really, left their hard scrabble farms and small towns for the first time in their lives to enlist. Learn what their thoughts were as they marched off to war and how they reacted to the horrors of war. Hear what it was like for the wives, children, mothers and father that they left behind, as well as the lasting impact of the war on the small towns in the Adirondacks following the war.

Pearsall spent two years researching the Civil War veterans from Johnsburg in the southeastern Adirondacks before preparing this special program based on letters and journals (which will be read by a Civil War re-enactors in uniform). The presentation will also include over 100 historic photographs of soldiers and battlefield scenes. &#8220Each member of the audience will be given a name of a soldier from the Adirondacks who fought in the war and will ultimately find out if they survived the war,&#8221  he told the New York History.

Pearsall’s presentation will focus on men serving with the 22nd New York (one of the first to respond to President Lincoln’s call to arms and recruited in Warren and Saratoga Counties), the 93rd (recruited from Essex, Fulton, Hamilton and Warren Counties who suffered horrific losses in the contest between U.S. Grant and Robert E. Lee), the 96th or &#8220Plattsburgh Regiment&#8221 (recruited primarily from Clinton County), the 115th (recruited from Hamilton and Fulton Counties) and the 118th or &#8220Adirondack Regiment&#8221 (recruited from Clinton, Essex and Warren Counties, the first regiment to enter the Confederate capital in Richmond on its fall). Pearsall will also explain a special Adirondack link to the capture of John Wilkes Booth, assassin of President Abraham Lincoln.

The &#8220Adirondack Regiment&#8221 will also be the focus of the weekend-long encampment at the Museum.  Mustered into service in August 1862, over one thousand North Country men served in the unit. Re-enactors will camp at the museum and share stories of camp life, and what it was like to be a soldier in the Civil War. Visitors will learn about the 118th assignments and movements, the battles they fought in, and the historic moment when General Robert E. Lee surrendered at the Appomattox Court House.

President Lincoln will be portrayed by John R. Baylis, who has appeared as the 16th President of the United States at Gettysburg, Antietam, Cedar Creek, Ottawa, and as far south as Key West.

Pearsall’s presentation will be held in the Auditorium at 7:00 p.m. The program will be offered at no charge to museum members- the fee for non-members is $5.00. For additional information, please visit www.adirondackmuseum.org or call (518) 352-7311.