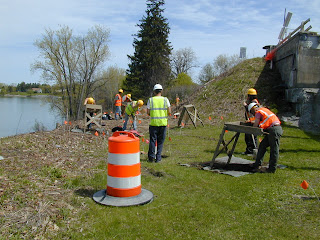 The Lake Champlain Bridge construction project helped reveal some exciting historic and archaeological findings at the Chimney Point State Historic Site in Addison, Vermont. On Thursday, June 21, at 7:00 p.m., site administrator Elsa Gilbertson presents an illustrated program about the Chimney Point experience during the bridge project and “what lies beneath.”

Archaeological work confirmed that the site has had a history of human habitation for 9,000 years, since the glacial waters receded, and that this was one of the most strategic spots on Lake Champlain for the Native Americans, French, British, and early Americans. What evidence did all these people leave behind?

The doors open to the public at 6:30 p.m. Come early, bring a picnic, go for a walk across the new bridge, and take a quick look at this year’s exhibit, “What Lies Beneath: 9,000 Years of History at Chimney Point,” before the talk at 7:00 p.m. The public is welcome. Free, donations appreciated.

The Chimney Point State Historic Site is located at 8149 VT Route 17, at the foot of the new Lake Champlain Bridge. Call 802-759-2412 for information. The site is open Wednesdays through Sundays and Monday holidays through Columbus Day, 9:30 a.m. to 5:00 p.m.