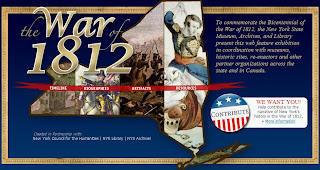 The New York State Museum has launched a new statewide website and Facebook page dedicated to commemorating the bicentennial of the War of 1812.

The website is expected to include a web-based exhibition and hoped to be a statewide clearinghouse for information about New York’s pivotal role in the War of 1812, as well as for all War of 1812 events across New York State and into Canada. The goal is to provide a site for conversation and coordination among all of those interested in commemorating the memory of the war.

The New York-Canadian border was the central front of the war, which was waged against the British Empire from June 18, 1812 to February 18, 1815. Some of the nation’s most prominent military figures of the early 19th century made their names along New York State’s northern frontier. Several pivotal battles also took place in the state, including the battle of Plattsburgh in September 1814.

“The War of 1812 is a ‘New York story’ and so too is our effort to commemorate this important bicentennial,” said Museum Director Mark Schaming. “We have reached out to historians, historical societies and various other collaborators and partners across the state and into Canada, inviting them to join with us in telling this story and making this the ‘go-to’ place to learn about the war and the many events planned to commemorate it.”

The website will be a growing and evolving statewide resource for the duration of the bicentennial commemorations. Interested historians – from academics to genealogists – will have an opportunity to submit 1812-related stories, whether they are biographies of local citizens or essays on New York-related events. A page devoted to biographies highlights valiant and patriotic men and women who contributed their time, energies, and in some cases, made the ultimate sacrifice to aid the war effort.

The site also provides a platform for historical societies and museums across the state to highlight their War of 1812 collections in a virtual artifact gallery. The site currently displays historic artifacts related to the War that are in the collections of the State Museum, State Library and State Archives.

A resources page lists website links for War of 1812 commemorative events and organizations, as well as for State Library resources and State Archives records.