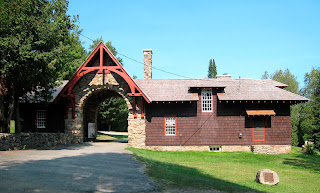 There will be a tour of Adirondack Great Camp Santanoni in Newcomb (Essex County), NY this Thursday, June 28, 2012. Santanoni was built for Robert and Anna Pruyn of Albany beginning in 1892. The estate eventually included 12,900 acres and nearly four-dozen buildings.

Led by AARCH staff, the tour will include stops at the Gate Lodge, Santanoni’s 200 -acre farm, and the Main Camp on Newcomb Lake where we’ll see the ongoing restoration of the camp complex and learn first hand about the conservation planning and restoration work.

The Santanoni Preserve is a State Historic Site, on the National Register of Historic Places, and a National Historic Landmark. AARCH has long been associated with the protection, interpretation and restoration of this regional treasure.

Adirondack Architectural Heritage (AARCH) is the nonprofit historic preservation organization for New York State’s Adirondack Park. AARCH was formed in 1990 with a mission to promote better public understanding, appreciation and stewardship of the Adirondacks unique and diverse architectural heritage.