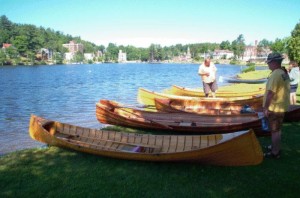 On Sunday July 1, 2012 will mark the 50th annual Willard Hanmer Guideboat Race commemorating Willard Hanmer the preeminent Guide Boat builder of his era. The race has been celebrated every year since 1962 on the Sunday closest to the 4th of July.

This year, to celebrate the craftsmanship of this uniquely Adirondack craft, the organizers are planning a display of over 50 guideboats in a guideboat parade on Lake Flower prior to the race. Following the parade will be guideboat, canoe and kayak races.

This year the one-person guideboat race will follow the traditional route on Lake Flower, carry around the dam and down the Saranac River to the Fish and Game Club where there will be food, refreshments ands festivities for the whole family. Canoes and kayaks will be following the one person guideboat course, also going down the river. For those wishing to race in either the guideboat, recreational canoe or kayak classes contact: [email protected]

According to the Historic Saranac Lake Wiki (a great local online history source) Willard J. Hanmer, the son of Thoedore J. Hanmer &#8220began working in his father’s boat shop as a child in about 1910, sticking tacks, caning seats and sanding hulls. He built his own shop in the 1920s.&#8221 The guideboat parade will be open to anyone wishing to display their guideboat. Natalie Bombard Corl Leduc, a participant in the inaugural race invites all past participants of the race to row in the parade. For those wishing to display their guideboats or participate in the guideboat parade contact: [email protected]