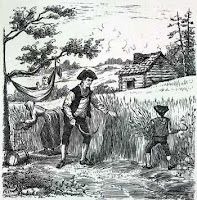 On Saturday, June 2, 2012, from 1:30 PM to 2:30 PM, Saratoga National Historical Park will offer a demonstration of 18th-century style scything. Imagine trying to maintain your lawn or a field using only a long, sharp blade.  Skilled living history teams will use 18th-century style scythes to clear large areas of field as they gather hay for farm animals. As they work, a park ranger will tell stories about farming and food harvesting in the late 1700s.

Illustration: Image from Benjamin Butterworth’s The Growth of Industrial Art depicting reaping grain by hand sickle during the colonial period.