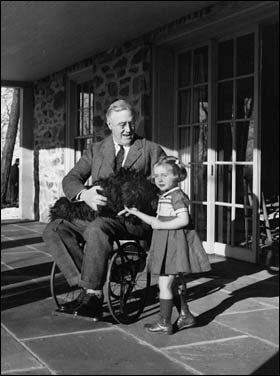 National Park Service Historian, Dr. Dennis Montagna will present a talk entitled “A Designing President—FDR and his Enduring Memorial” this Sunday, April 15 at 2:00 PM. The talk will be held at the Henry A. Wallace Visitor and Education Center located at the Home of Franklin D. Roosevelt National Historic Site in Hyde Park, New York. It is free and open to the public.

President Franklin Delano Roosevelt left detailed instructions regarding his burial in the rose garden at his Hyde Park estate. He also designed the monument to mark the site. Dr. Montagna will share information about the reasons behind FDR ‘s burial decisions and how some of his last wishes were not instituted.


After the presentation, there will be an informal ceremony in the Rose Garden to mark the 67th anniversary of FDR’s burial.

The talk coincides with the opening of a new exhibit in the Roosevelt Carriage House entitled: “Enduring Memorial: FDR’s Final Resting Place”. Beginning April 15, the exhibit is open daily 9:00 AM to 5:00 PM. The Carriage House is located behind the Home of Franklin D. Roosevelt.