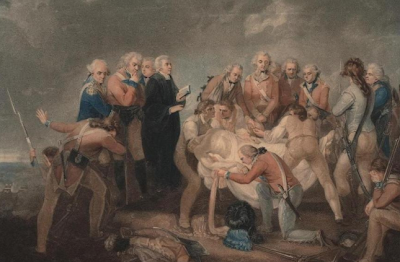 Traditional historical research draws primarily upon the written word- such as letters, journals, memorials, official documents and historical publications. Historians have shown less interest in historical visual arts that are often as important as written ones. In a lecture entitled &#8220A Striking Likeness: Using Artwork for Historical Research and Using Research to Study Artwork,&#8221 Saratoga National Historical Park Historian Eric Schnitzer will take a brief look at artwork focusing on themes related to the American War for Independence and how careful study of the visual arts can add new dimensions to our understanding of the past.

The event will be held at Fort Montgomery State Historic Site (in Orange County) on Thursday, April 26th at 7 PM.

PLEASE NOTE: Seating is limited to 50. You may reserve seats by calling 845-446-2134. Leave your name, phone number and number of people in your party.

Illustration: The Burial of General Fraser engraved by William Nutter, after John Graham, published by John Jeffryes, May 1, 1794.