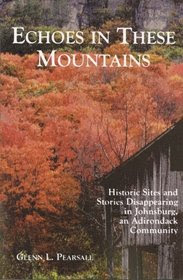 Glenn L. Pearsall’s Echoes in these Mountains, is subtitled &#8220Historic Sites and Stories Disappearing in Johnsburg, an Adirondack Community,&#8221 but thanks to Pearsall, a tireless advocate for local history, those historic sites and stories are being remembered.

The geography of Johnsburg, the largest township in New York State, is central to Echoes in these Mountains. The book is arranged in chapters highlighting various historic sites, all with handy maps to help locate them on the landscape. That approach &#8211 locating historical stories around town on the landscape &#8211 is part of what drives Pearsall’s personal exploration of his town’s history, and what led to the answer to an interesting historical question.

In 2006, as Pearsall began writing Echoes in these Mountains he set out to confirm long-held local oral history that Mathew Brady was born in Johnsburg and lived there until heading off to become, after his death, the most famous photographer of Civil War. (Brady’s photograph of Abraham Lincoln appears on the $5 bill &#8211 both the old and new designs).

From Brady’s personal letters historians had long known that he was born and spent his youth north of Lake George. Pearsall confirmed through vital records and census schedules that Brady had in fact grown up in Johnsburg, off the old road that went from the Glen to Wevertown (now the straightened Route 28). Bushwacking the old road near Gage Mountain, which now crosses private property, Pearsall found the remains of the homestead.

The story is illustrative of the trove of historical sites in Adirondack small towns, some yet hidden, some in plain sight. Echoes in these Mountains brings those in Johnsburg to life again.

The book is handy as well. GPS locations of each of the book’s 55 historic sites are included in addition to the maps, along with a driving tour. At more than 400 pages, this local history is comprehensive, and well footnoted, though disappointingly lacking an index when would make it all the more important a as reference work. But that’s a minor complaint considering the depth and breadth of Pearsall’s effort. It’s among the most important references to Johnsburg’s local history and an outstanding small study of one Adirondack community.