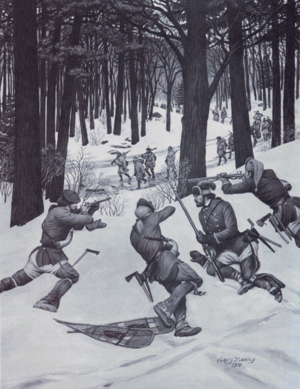 A living history event at Fort Ticonderoga highlighting Major Robert Rogers and the Battle of Snowshoes will be held on Saturday, March 10 from 10 am – 4 pm. Visitors will be able to encounter the French Garrison in the middle of winter inside Fort Ticonderoga and tour through opposing pickets of British rangers and French soldiers adapted to frontier, winter warfare. At 1 pm on Saturday, visitors will experience the hectic tree to tree fighting in a recreated battle during which the rangers make a stand against superior numbers, only to retreat through the deep woods.

Visitors will be invited to tour Fort Ticonderoga as it appeared in the winter of 1758, meet the French and Indians who overwhelmed Roger’s experienced woodsmen, and see how native and French soldiers survived the deep winter at this remote military post. More adventurous visitors can take a hike led by a historic interpreter through the opposed pickets of soldiers in the deep woods. In these tours visitors can see how rangers kept a vigilant watch for subtle signs that might reveal their ferocious enemy.

“The Battle on Snowshoes event recreates the savage fight between Robert Roger’s rangers, and a mixed French force of regular soldiers, milice, and allied native warriors on March 13, 1758,” said Stuart Lilie, Director of Interpretation at Fort Ticonderoga. “This event is designed to be a rich experience for both participants and visitors alike.”

Re-enactors portraying French soldiers and native allies will live inside the period furnished barracks rooms of Fort Ticonderoga. They will recreate the winter garrison for Fort Carillon, as it was known until 1759. Just as in the March of 1758 these re-enactors will sortie out from the Fort to meet and overwhelm Roger’s men.

Major Robert Rogers force of both volunteers from the 27th foot, and his own rangers headed out on an extended scout from Fort Edward along Lake George, following an attack on a similar patrol from Captain Israel Putnam’s Connecticut rangers. Hiking on snowshoes due to the three feet of snow, the tracks of Roger’s force were spotted on its march up the west side of Lake George. Near the north end of Lake George, Major Rogers, advanced scouts spotted their French counterparts. Rogers and his Rangers took up positions in a ravine, setting his force in ambuscade to await whatever French patrol would come to meet him.

The French patrol that met Roger’s men proved far larger than he imagined, and in this Battle on Snowshoes, the rangers’ ambush was itself surrounded and overwhelmed. In deep woods on deep snow, the rangers were forced to retreat with heavy casualties as the French regulars, malice, and natives pressed home their attack. Despite stands along the way, this retreat quickly became chaotic as rangers, Roger’s included, ran for their lives from superior numbers of French.