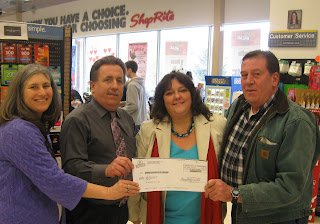 The Old Ellenville Cemetery, also known as the Leurenkill Cemetery, sits near the American Legion Post 111. It is the oldest public burial ground in the town of Wawarsing (Ulster County), with graves dating back to 1807. The earliest known veterans’ graves are from the War of 1812. This cemetery unfortunately suffers from many of the same problems that other old or abandoned cemeteries encounter. Recently, however, the Old Ellenville Cemetery received a needed financial boost with a combined effort involving the American Legion Post, The Veterans Grave Preservation Project, and Shop Rite in Ellenville.

This collaboration began last year when Laura Smith, who is President of The Veterans Grave Preservation Project, donated some used books to the American Legion Post to use for a fundraiser. The books were then placed on sale in Shop Rite for twenty-five cents each. One year later, cash sales of the books had accumulated to three hundred dollars. A few weeks ago, Shop Rite presented Legionnaire Richard Constant a check for this amount. The check was made out to the American Legion and placed in to their account to help Smith’s organization defray the expenses of maintaining the numerous veterans’ graves in the Old Ellenville Cemetery. “The money will be used to purchase items needed for the veterans in our local cemetery, also creating a grid map or a map so one can search the locations of these veterans.”

According to Smith, the goal of Veterans Grave Preservation Project is to “locate and identify all of the old cemeteries and burial grounds beginning with the Town of Wawarsing, New York to document the final resting places of our US Veterans. One grave and one cemetery at a time we will bring to order and restore with integrity, their final resting places.” As illustrated above, Smith’s organization is working closely with the American Legion’s Richard Constant in achieving the Project’s goal.

In my article last month entitled “Preserving Civil War Graves in New York State,” I wrote about the graves of some of the soldiers who died in the Civil War, as well as those who served during the war, which are scattered in many cemeteries throughout Ulster County. Some are in far corners of large cemeteries that were once smaller- others are located off of major roadways back in woods which have been long forgotten. Maintaining and preserving these older or abandoned cemeteries and burial grounds have become contentious issues in New York State.

Once a cemetery has been deemed abandoned, the local municipality becomes responsible for the care of its grounds by law. However, sometimes local municipalities perform minimal maintenance on these deserted grounds. This minimal maintenance consists of mowing the grass and removing brush and weeds, sometimes as little as twice a year. In addition, the municipalities have to maintain the integrity of any fences around the sites. As a result of gaining this knowledge, the Veterans Grave Preservation Project saw a niche to fill – to ensure that the burial grounds of these veterans are properly maintained.

The Veterans Grave Preservation Project, which consists of dedicated volunteers, has recently enjoyed a boon in activity and interest in its organization. For example, Luara Smith shared that she has been contacted by a local Boy Scout troop that has expressed interest in helping the organization during the upcoming year. In addition to helping Mrs. Smith raise money, individuals who work at Shop Rite in Ellenville stated that “they too would like to volunteer for a day to help in clean up and rehabilitation of damaged stones.” The increased publicity and awareness of the plight of veterans’ graves has renewed hopes that Smith will be able to realize her dream of a “sponsor a cemetery project.”

It is remarkable what a dedicated core of volunteers can accomplish when they set their hearts to it. Smith is quick to point out that one does not have to be a local in the area to lend a hand and that there are all levels of volunteering. Her organization is also always in desperate need of donations, implements, and publicity. For those who seek help in locating their ancestors who are buried in these cemeteries, there are numerous links available on the Veterans Grave Preservation Project website.

One thought on “Preserving Civil War Graves in NYS, Revisited”