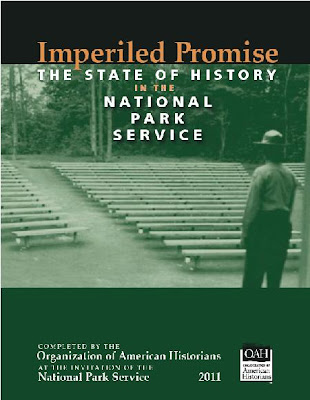 A new report examining the practice and presentation of American history at the National Park Service (NPS) from the Organization of American Historians (OAH) conclude that &#8220the agency’s ability to manage its sites&#8230- has been imperiled by the agency’s weak support for its history workforce, by agency structures that confine history in isolated silos, by longstanding funding deficiencies, by often narrow and static conceptions of history’s scope, and by timid interpretation.&#8221

&#8220All but a handful of&#8221 of NPS historians responding to a survey conducted for the study painted a &#8220bleak picture&#8221 of the state of the agency historical efforts:

&#8220They describe NPS history as &#8216-an afterthought’ relegated to &#8216-small cubicles and minor sideshows’ and therefore either &#8216-stagnant and irrelevant to today’s generation and issues’ or &#8216-moribund, old-fashioned, and largely irrelevant, with a couple of spots of fearlessness and innovation.’ It is &#8216-erratic,’ one respondent says, &#8216-outstanding in some places, awful in others.’ &#8216-Underfunded, undervalued, underutilized and misunderstood,’ summarizes another, while several express a sense of decline: history in the Park Service, respondents asserted, is &#8216-deteriorating’- &#8216-losing ground’- and &#8216-threatened.’

The report highlighted several specific shortcomings at NPS including, among others:

An underemphasis and underfunding of historical work as priorities shifted to natural resources, law enforcement, and other concerns-

An artificial separation of cultural resources management from interpretation-

A misperception of history as a tightly bounded, single and unchanging “accurate” story, with one true significance, rather than an ongoing discovery process in which narratives change over time as generations develop new questions and concerns, and multiple perspectives are explored.

The report makes or endorses nearly one hundred recommendations including:

A number of professional training, competency and historian employment recommendations-

Make NPS scholarship more widely available, both within and outside the agency-

Establishing a History Leadership Council, comprising the agency’s most talented and influential historians and interpreters, and a History Advisory Board &#8220comprising the nation’s leading public history professionals from beyond the agency—the most innovative curators, the most insightful scholars, the most savvy administrators&#8221- and

Encourage the OAH and the history profession to expand support history in the NPS.

The report is the result of a 2008 request by the NPS chief historian’s office to undertake a study of “the State of History in the National Park Service.” The report was produced by four historians: Anne Mitchell Whisnant (University of North Carolina at Chapel Hill), Marla Miller (University of Massachusetts Amherst), Gary Nash (University of California, Los Angeles), and David Thelen (Indiana University).

The report’s methodology included an electronic questionnaire sent to over 1,500 members of NPS’s permanent staff who have some responsibility for history, solicited perspectives
from retired and current NPS historians and administrators, and also external stakeholders such as historians in colleges and universities who have worked closely with the agency. The report’s producers visited dozens of parks and conducted seven large-group listening sessions at annual meetings of the OAH, National Council on Public History, and National Association for Interpretation. They also consulted OAH-sponsored site-visit reports, NPS administrative histories, and previous studies including the 1963 Leopold Report as well as the 1966 study With Heritage so Rich.

The full report, Imperiled Promise: The State of History in the National Park Service is available online [pdf].