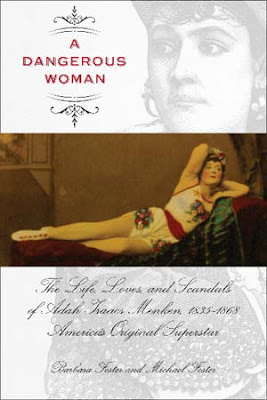 Adah Menken, dubbed “The Great Bare” by writer/admirer Mark Twain, was the first media celebrity, who was known around the world as “The Naked Lady” because her stage show featured her nude (in a sheer body stocking).

Her star power inspired poets like Walt Whitman and writers like Sir Arthur Conan Doyle, who used Menken as the basis for the classic Sherlock Holmes supporting character of Irene Adler. Her popularity was fueled by a new advent of the period, mass circulation newspapers.

Their reporters couldn’t wait to write about her latest adventure, according to biographers Michael and Barbara Foster, who call her the originator of the modern celebrity femme fatale.

In a century remembered for Victorian restraint, Menken’s modern flair for action, scandal, and unpopular causes &#8211 especially that of the Jewish people &#8211 revolutionized show business. On stage, she was the first actress to bare all. Off stage, she originated the front-page scandal and became the world’s most highly paid actress—celebrated on Broadway, as well as in San Francisco, London, and Paris. At thirty-three, she mysteriously died.

“Menken was an original who pioneered in several areas we now take for granted,” said the Fosters, authors of the newly published A Dangerous Woman: The Life, Loves and Scandals of Adah Isaacs Menken, 1835 – 1868 (Lyons Press, 2012). “Adah invented ‘stardom’ in the modern, media-driven sense, making use of the newly invented newspaper, the telegraph, photography, railroads and steamships to become the first global superstar — number one on Broadway, the rage of gold rush San Francisco, the toast of Victorian London and Paris. Onstage, Adah risked her life every evening in the Civil War sensation Mazeppa, in which apparently stripped naked she rode up a four-story stage mountain tied to a stallion. The mix of sexuality and danger made her the Civil War siren, the highest paid actress in the world, and caused her death at 33.”

Moreover, it wasn’t that Adah did these things to garner attention or as cheap publicity stunts. The Fosters believe that “Swimming Against the Current”&#8211an essay she wrote in defense of Walt Whitman&#8211was an essential part of her personality. There was nothing contrived about her.

A Dangerous Woman is the first book to tell Menken’s fascinating story. Born in New Orleans to a “kept woman of color” and to a father whose identity is debated, Menken eventually moved to the Midwest, where she became an outspoken protege of the rabbi who founded Reform Judaism. In New York City, she became Walt Whitman’s disciple. During the Civil War she was arrested as a Confederate agent—and became America’s first pin-up superstar. Menken married and left five husbands.

Michael Foster is a historian, novelist and biographer. A Dangerous Woman is his fifth book. Barbara Foster is an associate professor of women’s studies at City University of New York.