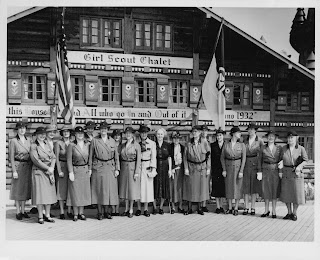 At the 1939 New York World’s Fair, Girl Scouts of the USA had their own building, a replica of Our Chalet in Switzerland, a World Association of Girl Guides and Girl Scouts (WAGGGGS) International Center.

It was located at the beginning of the Children’s World in the amusement area and served as a welcoming center for Girl Scouts and their friends. Queen Elizabeth of England and Crown Princess Ingrid of Denmark and Iceland were among the visitors to the Chalet. Special World’s Fair gifts and souvenirs, as well as Girl Scout equipment, could be purchased there. Learn more at the Girl Scout National Historic Preservation Center in New York City.