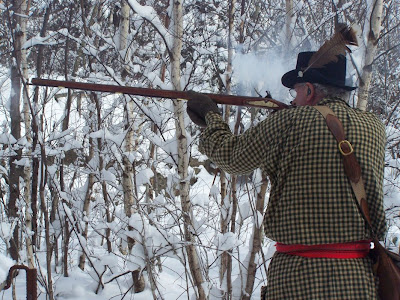 The St. Lawrence Valley Primitive Snowshoe Biathlon, organized by the Fort La Presentation Association and Forsyth’s Rifles and hosted by the Massena Rod & Gun Club, will be held March 3-4, 2012.

“In our primitive biathlon, competitors on snowshoes run or walk a measured course,” said Fred Hanss, an event organizer. “They must load and fire two shots from a muzzle-loading firearm at five targets set at well-spaced stations and throw an axe at the sixth station.”

Two of the three classes reflect the organizers’ mission to educate the public about the colonial and early American history of the St. Lawrence River Valley. In the first two classes, competitors using smoothbore muskets or rifles (flintlock or caplock) must cover the course on wooden snowshoes. In the third category, participants with in-line rifles may wear wooden or modern snowshoes.

The advance registration fee is $20. Registration on the day of the event is $25. After paying the initial registration fee, a re-entry fee of $5.00 will be charged each time that a participant runs the course.

Within the competitive classes, there are men’s, ladies’, and youth divisions. Awards will be presented to the top three participants in each division at a ceremony on Sunday afternoon.

“To add to the fun, a blanket shoot will be held and door prizes will be available Saturday and Sunday,” Mr. Hanss said. “Net proceeds from the primitive biathlon will go to the Fort La Presentation Association for the construction of an Interpretive Center and the reconstruction of historic Fort de la Presentation on Ogdensburg’s Lighthouse Point.”

Participants are encouraged to wear historic clothes covering 1750 to 1812. Fort de la Presentation was one of a handful of French colonial forts in New York State. Forsyth’s Rifles from Ogdensburg re-enacts a U.S. Army regiment posted in Northern New York during the War of 1812. From the French and Indian War period, they portray a unit of French marines.
Registration form and rules are at www.fort1749.org.

Northern New York during the War of 1812. From the French and Indian War period, they portray a unit of French marines.
Registration form and rules are at www.fort1749.org[/CATS].