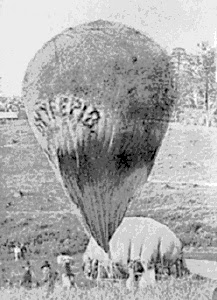 In late 1861, Virginia residents were shocked to see a manned balloon rise on the horizon, directing Union Army artillery against Confederate positions. One hundred and fifty years later, a replica of the Intrepid – the first type of aerial vehicle used for combat in the United States – will take flight this summer.

Genesee Country Village & Museum (GCV&M) has begun building the world’s only Civil War manned balloon replica, with the intent of offering flights to visitors starting July 4. Rising 400 feet (32 stories) above the 700-acre museum grounds in suburban Rochester, NY, the Intrepid will carry up to four passengers at a time in addition to the pilot.

“Our launch of the Intrepid brings to life one of the most unique elements of American history in a manner never before attempted,” said Peter Arnold, chief executive officer and president of GVC&M. “As Civil War remembrances occur across the nation during its 150th anniversary, we believed there was no better time to undertake this initiative. The balloon and the planned Civil War encampment surrounding the launch site further enhance our authentic 19th century village – the third largest collection of historic buildings in America.”

Not only was the Intrepid the predecessor to modern-day military aviation, but it also foreshadowed the future of military reconnaissance communications. The pilot would send intelligence information – troop movements, artillery compensation instructions, and more – to soldiers on the ground via telegraph. Conceived by Professor Thaddeus Lowe, the resulting Union Army Balloon Corps was personally approved by President Abraham Lincoln in June 1861.

Originally fueled by hydrogen gas, the Intrepid replica takes to the air with helium. Like the original seven gas balloons used during the Civil War, the Intrepid will be tethered to land for optimal convenience and safety.

Visitors will have the opportunity to book 15-minute flights for a nominal cost in addition to their museum entry fee. More details will be released over the course of the coming months.

The initiative’s total estimated cost of nearly $300,000 has been partially offset by a number of donations. As construction progresses, GCV&M will continue to seek additional financial support for the project.