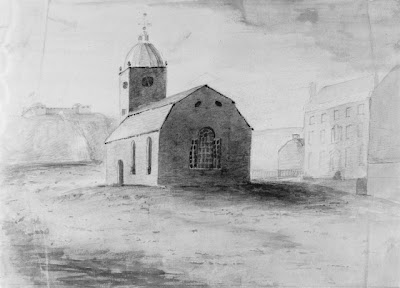 The Albany Institute of History & Art will be presenting the first of a three lecture series “300 Years, One Congregation”, about St. Peter’s Church on State Street on Sunday, February 12 at 2 PM. In this first lecture “In One City of Two Cultures, Ministering to Three Nations” the history, purpose, and influence of St. Peter’s Church in Albany will be explored by a panel of experts, including the Reverend Paul Hartt, Rector, Ms. E. Connie Powell, Church Archivist and Mr. Chris Grill, Mentor at Empire State College. This event is FREE with museum admission.

The lecture series is in conjunction with the upcoming exhibition “St. Peter’s Church in Albany”, opening at the Albany Institute on March 3 and running through April 29, 2012. The exhibition draws from the collections of St. Peter’s Church and the Albany Institute and includes the rarely seen 1712 Queen Anne Communion Service, land grants, portraits, furniture, drawings, prints, maps, and photographs to highlight the history of the church and its role in the historical events that shaped Albany and the Upper Hudson Valley.

The other two lectures included in the series are:

One Faith: The Stained Glass Windows at St. Peter’s Church

SUNDAY, MARCH 25 | 2 PM
Mr. Anthony Anadio will present an illustrated lecture of the stories told by the thousands of pieces of stained glass created by some of the world’s finest artisans that are part of St. Peter’s Church. The lecture will be followed by a tour of St. Peter’s to see the actual windows. FREE with museum admission.

The distinguished history of St. Peter’s Church in Albany, New York begins in 1708 when England’s Queen Anne sent missionaries to establish friendly relations with the Iroquois. A gambrel-roofed masonry edifice with a bell tower was completed in 1715. Located on State Street, just below present day Chapel Street, it was the first Anglican Church built north of New York City and west of the Hudson River. In 1802 Albany architect Phillip Hooker designed a new Federal Style church near the same location, which Richard Upjohn of New York City, well-known for his Gothic Revival Style replaced in 1860. His son, Richard M. Upjohn added the impressive bell tower in 1876. The richly decorated interiors include work by leading artists designers including windows designed by the English artist Edward C. Burne-Jones and fabricated by the William Morris Company of London in 1880- the chancel windows made by Clayton and Bell of London in 1885- and the rose window over the State Street entrance made by the Tiffany Company in 1892. The exhibition, drawn from the collections of St. Peter’s Church and the Albany Institute, include the rarely seen 1712 Queen Anne Communion Service, land grants, portraits, furniture, drawings, prints, maps, and photographs arranged to highlight the history of the church and its role in the historical events that shaped Albany and the upper Hudson Valley.