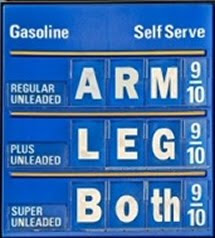 On a gas pump near Plattsburgh a few days ago, the price for Regular Grade was just under $4.00 per gallon. As a follow-up, check this out: “The American Petroleum Institute’s weekly report says that despite a sharp increase in crude oil output … there have been extensive gasoline price advances.” And, regarding local prices, “… there has been a long agitation against what northern New York motorists have considered discrimination against the North Country.

“The committee appointed last Tuesday by the New York Development Association will investigate the reason for the difference in the price of gasoline in northern New York as compared with prices charged in Utica and Syracuse.” Here’s why you shouldn’t be encouraged by those quotes: though they sound current, they’re taken from the 1920s.

History can be fun, entertaining, and educational, but it can also provide guidelines to the future. And that’s where society tends to fail so often, a fault alluded to in the old proverb suggesting that those forgetting the past are doomed to repeat it. This price-of-gas situation has happened often in the past, and here we go again. Same problems, same rhetoric, same lack of results.

Average Americans have been sold the big lie over and over, and we keep coming back for more. If you recall: the fuel crises from now back through the 1980s- gas rationing in the 1970s (remember odd-and-even days, long lines at the pumps, and limited purchases?)- and other similar periods, then tell me if this sounds familiar: “FTC hearings will be held on the unexplained rising price of gasoline, in compliance with a senate resolution.”

That quote is from 1916, and the price increase wasn’t “unexplained.” It was gouging by the oil companies during World War I. It was okay to screw the public, but not the feds. Within a year of when the US finally joined the war, Federal Fuel Administrator H. A. Garfield announced he was studying plans “to fix the price of gasoline for domestic customers, as well as for the government and Allies, at a lower figure than the present market price.”

In the years immediately following the war, gas prices doubled, and for good reason: the sales of cars skyrocket in the 1920s, and what better way for oil companies to take advantage than raise the price of fuel for those millions of new vehicles?

Of course, the same arguments you hear today were applied then: it’s not greed, it’s capitalism, and thus the market’s natural response to supply and demand forces. Greater demand supposedly drove prices higher, and the poor oil companies were “forced” to reap historic profits. Why, oh why, does that sound so familiar?

It continues nearly a century later … just look at Exxon and Chevron’s recent quarterly statements. Fighting back against these behemoths hasn’t been successful. The rising prices of the early 1920s prompted another federal investigation led by Senator LaFollette, who said, “Unless there is government intervention, the price of gasoline will be pushed beyond the reach of the ordinary automobile owner.” Again, of course, the findings were ignored.

There may be a good reason why nothing concrete resulted from all of the investigations. In 1919, Oregon became the first state to institute a gasoline tax intended to provide funding for the repair and maintenance of roadways. It looked like a great system, and the idea spread across the country. Governments soon corrupted the process, simply taxing gasoline as a revenue source.

It’s almost impossible to believe, but New York was one of the last two states to follow suit. (Here’s one thing to be proud of, though—New York has managed to regroup and pass every state in the tax category). In 1929, Governor Franklin Roosevelt signed a large farm-aid legislative package that included the Hewitt-Pratt bill, a clause that led him to threaten a veto.

Hewitt-Pratt contained this order: “Moneys paid into the state treasury pursuant to this subdivision [the gas tax] shall be appropriated and used for the maintenance and repair of the improved roads of the state, under the direction of the superintendent of public works.”

Well, sort of. The state imposed a two-cent gas tax, returning a percentage of the take to the individual counties based on road mileage, but depositing the remainder in the state treasury. 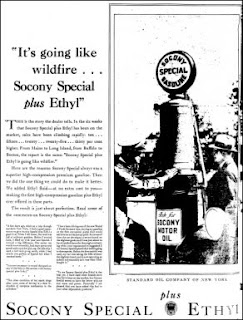 Raising the price of gas posed a concern in the 1930s, but not to worry. State Tax Commissioner Thomas Lynch said that there was “no assurance that the public would pay two cents more for gas.” Since it was taxed at the source (the distributors), Lynch said the oil companies would probably just absorb the cost. (A fine example of naivete on its grandest scale.)

As for that new money in the treasury? In no time at all, politicians were appropriating gas-tax funds for a variety of non-road-related uses. Once the feeding frenzy began, it was all over. Requests to raise the gas tax soon became routine. After all, it was a state income bonanza.

It probably comes as no surprise that, in 1929, the Supreme Court rejected efforts by the states to treat gasoline as a public utility. Natural gas and electricity were somehow necessary, but gas was deemed a commodity that we could do with or without. And so Standard Oil (the father of virtually every major oil company) won the right to regulate itself.

Today’s ExxonMobil was formerly known as Standard Oil, and for them, it was business as usual—move into an area, depress prices by lowering its own price, put the competition out of business, and then raise prices at their whim. Walmart has been accused of employing the same tactics.

What were the results of the gas-price problems in the 1990s? The 1970s? The 1920s? All the same. Oil companies flourished, while consumers, victimized by high prices, explored electric cars, ethanol fuel, and sometimes just did without. The huge ethanol movement of a few years ago was hardly different from 1997 and 1927, mostly serving as a boon for farmers.

So, as prices rise and you begin to see articles and editorials complaining about the oil companies, and about the inexplicably higher cost of gas in the North Country, it may be a story, but it’s not news. There’s nothing new about it at all.