Untouched scenic vistas and natural landscapes are treasured in the Adirondacks. Seventy years ago, Pok-O-Moonshine Mountain, a popular landmark since admired by millions, was nearly transformed into something far different from its present appearance.

It all began in 1937 with the editor of the Essex County Republican -News, C. F. Peterson. Formerly a Port Henry newspaperman, active in multiple civic organizations, and clearly pro-development and pro-North Country, Peterson was a force to be reckoned with.

Just how influential was he? The Champlain Bridge that was recently blasted into oblivion probably should have been named the Carl F. Peterson Bridge. In fact, efforts were made to do exactly that. Peterson originated the bridge idea, and as Vermont and New York debated whether to locate it at Ticonderoga, Crown Point, or Rouses Point, it was Carl who put his all into promoting the Crown Point site.

When Peterson talked, people listened, and eight years later, when he urged the Essex County Board of Supervisors to action, they took him at his word. The 200th anniversary of the birth of New York State’s first governor, George Clinton, was approaching. To honor the occasion, Peterson pushed for an appropriately lasting memorial to an undeniably great American.

The board responded with a succinct message to state leaders: “The resolution requests the legislative body at Albany to name a commission for the observance next year, asking that the group should consider the feasibility of perpetuating the memory of Governor Clinton by the carving of his likeness on the side of Pok-O-Moonshine Mountain.”

Seeking support for his proposal, Peterson framed the idea in patriotic terms, and it worked like a charm. Among the first to jump on the bandwagon was Senator Benjamin Feinberg of Clinton County. (The library at Plattsburgh State—Feinberg Library—was named in his honor).

A man of great power and influence, Feinberg wrote this in a letter to Peterson: “Your suggestion … is a good one. Undoubtedly, some action will be taken by the legislature to fittingly observe this anniversary, and I shall be glad to aid in carrying out such a plan. The carving of the likeness of Governor Clinton on the side of Pok-O-Moonshine would not only be a great attraction to visitors, but would commemorate the birth of the first Governor of the state in a magnificent manner.”

With Feinberg on board, the idea gained momentum. The Essex County branch of the American Legion adopted a resolution in support of the memorial. The idea also received the unanimous backing of the Adirondack Resorts Association.

After all, it sounded like a great cause and a fine way to express patriotism. Widespread approval was expected, and it didn’t hurt that the idea coincided with the pending completion of a national monument—Mount Rushmore in South Dakota.

An editorial by the Plattsburgh Daily Press added this supportive comment: “We can think of no son of the State who has deserved better from the hands of the people, and it is sincerely to be hoped that the legislature will show its recognition of this by providing for this statue on rugged old Pok-O-Moonshine Mountain.”

The gung-ho beginning preceded a period of thoughtful consideration. Then, dissent began to surface. In January 1938, a Ticonderoga organization passed their own resolution, stating in part: “… it is the considered opinion of the Ticonderoga Kiwanis Club that the forests, streams, lakes, and mountains of Essex County constitute the county’s greatest asset … and that unnecessary artificial alteration of the natural state of these resources irreparably diminishes their value to our citizens. … Be it hereby resolved that the Ticonderoga Kiwanis Club is unalterably opposed to the said requested legislation and to any attempt to alter or deface the natural beauty of Pok-o-Moonshine Mountain …”

The letter was sent to several officials, including Governor Lehman and Senator Feinberg. The Kiwanis were soon joined by Ti’s Chamber of Commerce, the Adirondack Mountain Club, and the Keene Valley Garden Club. All supported the observance of Clinton’s birthday, but opposed the altering of Poko’s steep cliffs. One alternative proposal was a “super-improved highway through this region, to be known as the Governor Clinton Memorial Highway.”

Though many protests against the plan had surfaced, the danger to Pok-O-Moonshine was real. In March, among the final rush of bills passed by the legislature was the Feinberg-Leahy bill (by Feinberg and Assemblyman Thomas Leahy of Lake Placid). It called for a $5,000 funding package to prepare a celebration in Clinton’s memory.

With the state and the nation still struggling to recover from the Depression, many bills were vetoed, and that same fate befell Feinberg-Leahy. In April, Governor Lehman vetoed a second bill, “… designed to bring about the carving of a memorial to Governor George Clinton, the state’s first chief executive, on the face of Pok-O-Moonshine Mountain in Essex County.”
Supporters were disappointed, certain the carving would have been a great tourist attraction. 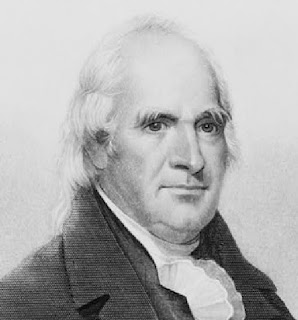 No one in opposition was suggesting Governor Clinton wasn’t worthy of such honor. He was widely revered as one of the state’s greatest citizens. After serving under his father in the French and Indian War, George Clinton practiced law and held various public offices. A staunch defender of the colonial cause for independence, he was selected as a member of the Second Continental Congress.

Clinton voted in favor of the Declaration of Independence, but missed the signing, and for good reason, having been urgently dispatched to serve as brigadier-general of the militia by his good friend, George Washington (so good, Clinton named his children George and Martha).

Clinton saw action at White Plains and other locations. He eventually served as governor of New York for 18 consecutive years, and 22 years in all, the longest of any New York governors. He was vice-president under Thomas Jefferson and James Madison, one of only two vice-presidents to serve under two different presidents. He also became the first vice-president to die in office, succumbing to a heart attack in 1812.

Perhaps the governor’s carved likeness would have been a great tourist attraction, but Poko today gets plenty of attention for other reasons: spectacular cliffs clearly visible from Interstate 87- peregrine falcon nests- the climbing trail leading to magnificent views- the preserved fire tower- and a reputation as one of the most popular rock-climbing sites in the Adirondacks.