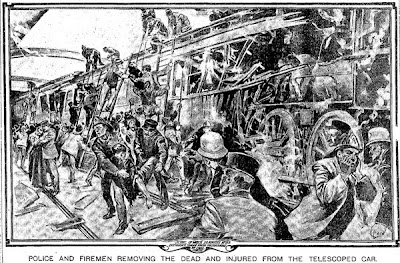 This Sunday marks the anniversary of a largely forgotten piece of New York history. On January 8, 1902, there was a train collision in the train tunnels of New York City. As a result of this disaster, laws were passed in NY which banned steam engines from entering Manhattan and forced the train companies to look into designing electric rails for their commuter trains. To accommodate electric rails, the old Grand Central Depot was torn down and the new and larger Grand Central Station was built, which changed the landscape of NYC forever.

Researcher Cathy Horn has been building an online memorial to the event which includes lists of those involved (including some short biographies), photos, documents, and newspaper clippings from the event.