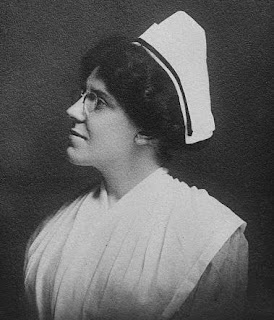 In Adirondack history, like in most other parts of America, war heroes abound. Traditionally, they are men who have lost limbs, men who risked their lives to save others, and men who fought valiantly against incredible odds. Some died, while others survived, but for the most part, they shared one common thread: they were all men. But in my own humble estimation, one of the North Country’s greatest of all war heroes was a woman.

Florence Church Bullard, the female in question, was “from” two places. Known for most of her life as a Glens Falls girl, she was born in January 1880 in New Sweden, a small settlement in the town of Ausable.

By the time she was 20, Florence had become a schoolteacher in Glens Falls, where she boarded with several other teachers. Seeking something more from life, she enrolled in St. Mary’s Hospital, a training facility of the Mayo Brothers in Rochester, Minnesota. After graduating, she worked as a private nurse for several years.

In December 1916, four months before the United States entered World War I, Florence left for the battlefields of Europe. As a Red Cross nurse, she served with the American Ambulance Corps at the hospital in Neuilly, France, caring for injured French soldiers. They often numbered in the thousands after major battles.

On April 6, 1917, the United States officially entered the war, but the first American troops didn’t arrive in Europe until the end of June. Florence had considered the possibility of returning home by fall of that year because of potential attacks on the home front by Germany or Mexico (yes, the threat was real).

But with the US joining the fray in Europe, Florence decided she could best serve the cause by tending to American foot soldiers, just as she had cared for French troops since her arrival.

Until the Americans landed, she continued serving in the French hospital and began writing a series of letters to family and friends in Glens Falls and Ausable. Those missives provide a first-hand look at the war that took place a century ago.

The US had strongly resisted involvement in the conflict, but when Congress voted to declare war, Florence described the immediate reaction in Europe. Her comments offer insight on America’s role as an emerging world power and how we were viewed by others back then.

“I have never known anything so inspiring as Paris has been since the news came that America had joined the Allies. Almost every building in Paris is flying the American flag. Never shall I forget last Saturday evening. I was invited to go to the opera … that great opera house had not an empty seat. It was filled with Russians, Belgians, British, and French, with a few Americans scattered here and there. Three-quarters of the huge audience was in uniform. 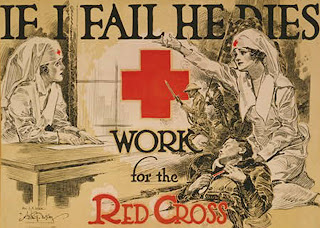 “Just before the curtain went up for the second act, the wonderful orchestra burst out into the ‘Star Spangled Banner.’ In a flash, those thousands were on their feet as if they were one person. One could have heard a pin drop except for the music. The music was played perfectly and with such feeling. Afterwards, the applause was so tremendous that our national anthem was repeated.

“The tears sprang to my eyes and my heart seemed to be right in my throat. It seemed as if I must call right out to everyone, ‘I’m an American and that was my national anthem!’ I have never witnessed such a demonstration of patriotism in my life. The officers of every allied nation clad in their brilliant uniforms stood in deference to our country.”

The work she had done thus far received strong support from the folks back home. In a letter to her sister in Ausable, Florence wrote, “Try to know how much gratitude and appreciation I feel to you and all the people of Glens Falls who have given so generously of their time and money. It was such fun to help the committee open the boxes and to realize that the contents had all been arranged and made by people that I know personally.

“The committee remarked upon the splendid boxes with hinged covers and the manner in which they were packed. When the covers were lifted, the things looked as if they might have been packed in the next room and the last article just fitted into the box. I was just a little proud to have them see how things are done in Glens Falls. Again, my gratitude, which is so hard to express.”

Florence’s credentials as a Mayo nurse, her outstanding work ethic, and connections to some important doctors helped ease her transition into the American war machine. The French, understandably, were loathe to see her go, so highly valued was her service.

In a letter to Maude, her older sister, Florence expressed excitement at establishing the first triage unit for American troops at the front. They were expected to treat 5,000 to 10,000 soldiers every 24 hours. Upon evaluation, some would be patched up and moved on- some would be operated on immediately- and others would be cared for until they were well enough to be moved to safer surroundings.

Florence’s sensitive, caring nature was evident when she told of the very first young American to die in her care. “He was such a boy, and he told me much about himself. He said that when the war broke out, he wanted to enlist. But he was young, and his mother begged him not to, so he ran away. And here he was, wounded and suffering, and he knew he must die.

“All the time, that boy was crying for his mother … he was grieving over her. And so I did what I could to take her place. And during the hours of his delirium, he sometimes thought I was his mother, and for the moment, he was content. 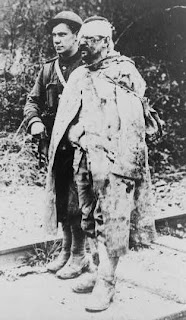 “Every morning, that lad had to be taken to the operating room to have the fluid drawn from off his lungs because of the hemorrhage. When finally that last day the doctor came, he knew the boy’s time was short and he could not live, so he said he would not operate. But the boy begged so hard, he said it relieved him so, that we took him in.

“And then those great, confident eyes looked into mine and he said, ‘You won’t leave me mother, will you?’ And I said, ‘No, my son.’ But before that simple operation could be completed, that young life had passed out. And I am not ashamed to tell you that as I cut a curl of hair to send to his mother, my tears fell on that young boy’s face-—not for him, but for his mother.”

Working tirelessly dressing wounds and assisting the surgeons, Bullard displayed great capability and leadership. She was offered the position of hospital superintendent if she chose to leave the front. It was a tremendous opportunity, but one that Florence Bullard turned down. Rather than supervise and oversee, she preferred to provide care directly to those in need.

Lawrence Gooley has authored ten books and dozens of articles on the North Country’s past. He and his partner, Jill McKee, founded Bloated Toe Enterpr
ises in 2004. Expanding their services in 2008, they have produced 19 titles to date, and are now offering web design. For information on book publishing, visit Bloated Toe Publishing.