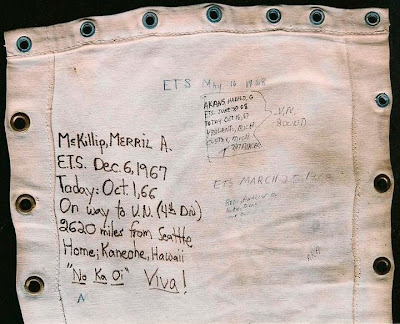 The personal thoughts and feelings of American soldiers and Marines going to war in Southeast Asia come to life in the “Marking Time: Voyage to Vietnam” exhibition opening Nov. 11 (Veterans Day) at the New York State Museum.

The stories of these soldiers and Marines are told through the graffiti they left behind on the bunk canvases they slept on, aboard a ship that brought them to Vietnam in 1966-67. Eight canvases inscribed by soldiers from New York state are included in the traveling exhibition, open until Feb. 26, 2012. Uncertain about their future, the young troop passengers inscribed personal thoughts about families, hometowns, patriotism, love, anxiety, discomfort and humor.

Their canvases, bunks and personal items were discovered in 1997 onboard the General Nelson M. Walker. The transport ship was being scrapped after seeing service during World War II and the Korean and Vietnam wars. In between it was in reserve status in a Hudson River berthing area, near New York City, for six years. Military historian Art Beltrone discovered the historic graffiti and other artifacts during a trip to Virginia’s James River Reserve Fleet, where the ship had been relocated from New York.

When discovered, the Walker was a veritable floating time capsule, filled with hundreds of historical artifacts relating to the Vietnam War, the 1960s, and the men who went to war. Many of those artifacts will be on display. Included is an original eight-man rack of sleeping bunks, complete with the original mattresses, sheets, pillows, blankets and life vests. The rack shows how confining living space was during the uncomfortable 18-23 day, over 5,000-mile voyage to Vietnam. There also is clothing, shoes, comic books, magazines and copies of The Walker Report, the ship’s official newspaper written, printed and distributed by troop passengers. Other personal objects left behind, such as playing cards, empty cigarette and candy wrappers, liquor bottles, religious tracts and rosary beads, were found hidden under the sheets.

The multi-dimensional exhibition also includes two short films, “Marking Time: Voyage to Vietnam” and “Discovery of a Forgotten Troopship,” which can also be viewed online.

The exhibition is curated by Beltrone and his wife, Lee of Keswick, Va. Together they founded the Vietnam Graffiti Project (VGP) which, assisted by the Virginia Foundation for the Humanities, is dedicated to finding the graffiti writers and Walker voyage passengers to tell and preserve their stories. VGP is still trying to identify many of the writers, including many of those from New York state. Among those who have been found are Harmon Adams of Kenmore, near Buffalo, and Dave Dubreck of Churchville, near Rochester.