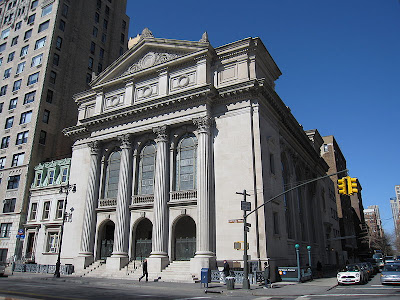 Rare and centuries-old liturgical objects, manuscripts, maps and other historic artifacts—including a Torah scroll rescued from the hands of British troops during the American Revolution — will be on loan to the New-York Historical Society beginning November 11, 2011, for the installations The Resilient City and Treasures of Shearith Israel.

The presentations of Treasures of Shearith Israel and The Resilient City at the renovated and transformed New-York Historical highlight the history of religious freedom in New York City and honor the first Jewish congregation to have been established in North America—a congregation that remains vibrant and active today, and is a neighbor of New-York Historical.

Congregation Shearith Israel, the Spanish-Portuguese Synagogue, was founded in 1654 by the first Jews to settle in North America: a group of 23 immigrants who came to New Amsterdam from their previous place of residence in Recife, Brazil. From 1654 through 1825, Shearith Israel was the only Jewish congregation in New York City. The congregation met in rented quarters until 1730, when it constructed its first building, which was located in downtown Manhattan on Mill Street (now known as South William Street). Many of the furnishings from the 1730 building are now installed in an intimate chapel, called the Little Synagogue, in Shearith Israel’s current home, consecrated in 1897, on the Upper West Side.

The Torah Scroll will be on display in the Judith and Howard Berkowitz Sculpture Court in the Rotunda of the New-York Historical Society, where it will be surrounded by four late-20th-century views of the New York cityscape by artist Richard Haas. This installation will establish a dialogue between the city’s past and present and help reinforce the underlying themes of diversity, tolerance and resilience that are also addressed in inaugural installations presented in New-York Historical’s new Robert H. and Clarice Smith New York Gallery of American History, where visitors may explore the history of the United States as seen through the lens of New York. The many other significant objects on loan to New-York Historical from Shearith Israel will be displayed in the Henry Luce III Center for the Study of American Culture.

These loans have been facilitated Norman S. Benzaquen.