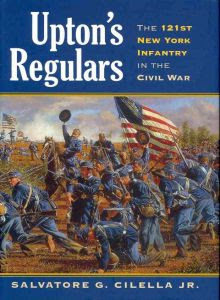 In 1861, New Yorkers responded to President Lincoln’s call to service by volunteering in droves to defend an imperiled Union. Drawn from the farms and towns of Otsego and Herkimer counties, the 121st New York State Volunteer Infantry Regiment served with the Sixth Corps in the Army of the Potomac throughout the Civil War. In the first comprehensive history of the regiment in nearly ninety years, Salvatore Cilella chronicles their epic story.

Led for much of the war by Emory Upton, the 121st deployed nearly 1,900 men into battle, from over 1,000 at call-up to the 330 who were finally mustered out of its war-depleted unit. Its soldiers participated in 25 major engagements, from Antietam to Sailor’s Creek, won six Medals of Honor, took several battle flags, led the charge at Spotsylvania, and captured Custis Lee at Sailor’s Creek. Cilella now tells their story, viewing the war through upstate New Yorkers’ eyes not only to depict three grueling years of fighting but also to reveal their distinctive attitudes regarding slavery, war goals, politics, and the families they left behind.

Cilella mines the letters, diaries, memoirs, and speeches of more than 120 soldiers and officers to weave a compelling narrative that traces the 121st from enlistment through the horrors of battle and back to civilian life. Their words recount the experience of combat, but also rail against Washington bureaucrats and commanding generals.

Cilella also features portraits of the regiment’s three commanders: original recruiter Richard Franchot- West Pointer Upton, by whose name the 121st came to be known- and Otsego County native Egbert Olcott. Readers will especially gain new insights into the charismatic Upton, who took command at the age of 23 and became one of the army’s most admired regimental leaders.