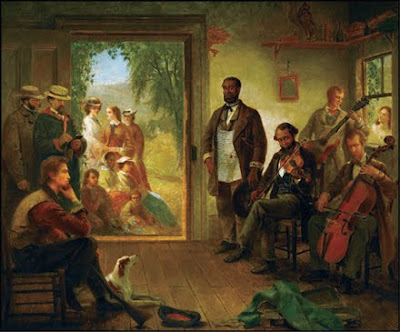 Two regionally significant landscape paintings of Trenton Falls, New York by the 19th-century American artist Thomas Hicks (1823-90), recently acquired by the Munson-Williams-Proctor Arts Institute Museum of Art for its permanent collection, are presently displayed in the Edward Wales Root Sculpture Court. The landscapes are just two of the numerous treasures unveiled for the first time in the exhibition, “Enhancing a Legacy: Gifts, Promised Gifts, and Acquisitions in Honor of the Museum of Art’s 75th Anniversary.”

Hicks was one of the United State’s most successful mid-century portraitists. His summer sojourns in central New York State, and his personal friendship with Michael and Maria Moore, who owned and managed the fashionable Trenton Falls Hotel, led him to paint a sensitive group portrait of the Moore family, and the two important landscapes the Museum recently acquired with financial assistance of several donors.

The landscapes are intimate views of two of the sequence of rivulets, cascades, waterfalls, and pools that make up Trenton Falls, a picturesque tourist site in Oneida County. The landscapes hung in the lobby of the Trenton Falls Hotel for many decades. After descending in the Moore family they passed into the hands of a local family who owned them for approximately 60 years before being acquired by the Museum of Art.

Now, installed in mid-19th-century style frames, the two landscapes, along with Hicks’s portrait of the Moore family, are displayed in the Museum for the first time in more than 20 years. To mark this historic event the Museum has published a brochure with an insightful essay about the pictures written by Dr. David Tatham of Syracuse University. Additional insights about the paintings will be presented by Dr. Paul D. Schweizer, Museum Director & Chief Curator, in a lecture titled, “A Look Behind the Falls: The Museum’s Newly Acquired Trenton Falls Landscapes by Thomas Hicks” 4 p.m. Thursday, December 8 in the Museum of Art Auditorium.

Schweizer’s lecture is the second in a three-part series that will be presented by the Museum’s curatorial team in November, December, and January of 2012. Each lecture will provide behind-the-scenes remarks about the reasoning and effort that led to the acquisition of some of the artworks displayed for the first time in the Enhancing a Legacy exhibition. The series is designed to provide insights about the curatorial process, an essential but sometime little-known function for any public museum that collects, preserves, and interprets works of art. All three of the lectures are free and open to the public. Check the “Events” calendar of the Institute’s Bulletin or the Institute’s web site for the dates of the two other lectures in this series.