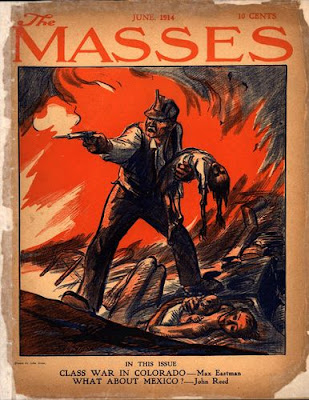 A huge range of print media — newspapers, magazines, short stories, even song lyrics— flooded the popular market in the early years of the 20th century. These publications relied on illustrations by William Glackens, John Sloan, George Luks and their contemporaries to inform, entertain and shape public attitudes.

The New-York Historical Society will host Dr. Mecklenburg’s free lecture, sponsored by the Sansom Foundation, about how these visual narratives helped Americans deal with the fast-changing circumstances of contemporary life. The lecture will be held on December 1, 2011, beginning at 6:30 pm. Seating is limited, and reservations are required- please call (212) 485-9266 or e-mail [email protected] to reserve seats.

Distinguished art historian and curator Virginia Mecklenburg, Senior Curator at the Smithsonian American Art Museum in Washington, D.C., will deliver the 2011 C. Richard Hilker lecture titled “Guttersnipes and Suffragettes: Ashcan Art and the Popular Press.” Dr. Mecklenburg earned both her BA and MA at the University of Texas at Austin, and her doctorate in art history at the University of Maryland at College Park. Her recent publications include Telling Stories: Norman Rockwell from the Collections of George Lucas and Steven Spielberg and Modern Masters: American Abstraction at Midcentury. She is currently working on African American Art in the 20th Century, the catalogue for an exhibition that will open at the Smithsonian in April 2012.

The Sansom Foundation is a non-profit organization that supports numerous causes. The Foundation is named for the Philadelphia street where the American painter William J. Glackens was born, and was established in the 1950s by the artist’s son Ira Glackens and his wife Nancy. In 1990, after the founders’ deaths, C. Richard Hilker assumed leadership of the Foundation until his death in 2001, when the Sansom Foundation inaugurated a series of scholarly lectures to celebrate and commemorate his leadership.

Founded in 1804, New-York Historical has a mission to explore the richly layered political, cultural, and social history of New York City and State and the nation and to serve as a national forum for the discussion of issues surrounding the making and meaning of history.

Illustration: Cover of The Masses by John Sloan following the Ludlow Massacre of April 20, 1914.