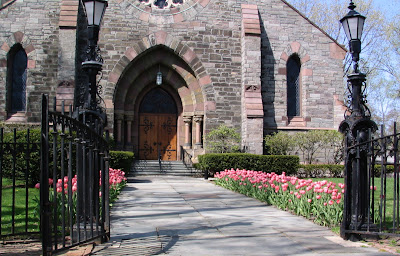 He will speak at the First Reformed Church of Schenectady’s weekly Forum, following the 10:00am worship service. The Forum is held in the Poling Chapel, 11:15am &#8211 noon. Mouw will speak about Archives of the First Reformed Church: Stories they Illuminate, Facts they Reveal, and Mysteries they Still Hold. Original 17th and 18th century church records, written by founders of Schenectady and the Church, will be shown.

After the Forum there will be a Brunch at the Stockade Inn &#8211 12:15pm, $20/person, across the street from the church. An afternoon Workshop will follow at the Schenectady County Historical Society, 32 Washington Avenue &#8211 a block’s walk around the corner from the Inn. Dr. Mouw invites anyone having early colonial documents, especially any in Dutch, to bring them for a “Show, Translate & Tell” session. Documents in the historical society’s collection will also be part of the program.

Mouw is translator of the De Hooges Memorandum Book for the New Netherland Institute, and he is an authority on the history of the Dutch Reformed Church. Currently a Fellow of the Reformed Church Center, he received the 2002 Albert A Smith Fellowship for Research in Reformed Church History. He is the author of a short biography of Schenectady’s first minister, Petrus Tesschenmaecker, who was killed in the 1690 Schenectady Massacre. Mouw is co-editor with two Dutch historians of Transatlantic Pieties: Dutch Clergy in Colonial America, which includes his Tesschenmaecker biography and will be in print by early 2012.

Mouw’s writing that won the Hendricks Award, Moederkerk and Vaderland: Religion and Ethnic Identity in the Middle Colonies, 1690-1772, rejects the myth prevalent in histories of the Middle Colonies, that the inhabitants of what had been New Netherland and their descendents quickly abandoned their churches and cultural identity, melting into the society and ways of English or American rule. Records in the Archives of Schenectady Reformed shed light on the people of the northernmost part of New Netherland Colony, showing how they remained faithful to their heritage and churches despite the changing colonial linguistic, governmental and religious environment around them.

Mouw’s work involving Schenectady is of special interest this year as it is the 350th anniversary of Arendt van Curler’s 1661 founding of Schenectady. As Mouw rejects certain historical accounts, scholars, historians, archaeologists and artists in this area have been making discoveries that are leading to new interpretations of Schenectady’s history.