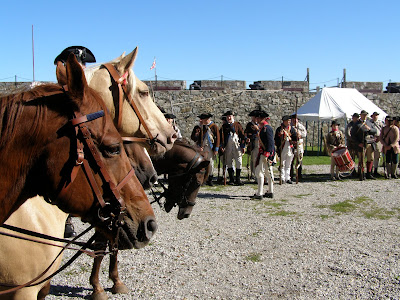 Visitors to Fort Ticonderoga can explore 18th-century holiday traditions at Fort Ti’s &#8220Hot Chocolate at Cold Fort&#8221 event. Participants can visit with historic interpreters portraying Continental soldiers from Pennsylvania in 1776 and experience how very different Christmas at that time was compared to our modern holiday traditions. Learn about Saint Crispin’s Day from a shoemaker at the Fort and experience the simple holiday pleasures the frontier garrison enjoyed. Taste a sample of hot chocolate based on a recipe from the 18th-century and experience a celebration at Fort Ticonderoga in 1776 Saturday, December 3, 10 am – 4 pm. Regular admission rates apply. Ticonderoga residents are free.

Much of Ticonderoga’s 1776-1777 winter garrison was composed of soldiers of the 4th Pennsylvania battalion. The soldiers were from the vicinity of Chester, Pennsylvania. In large part they were Quaker or Anglican. For the few Anglicans among these men, Christmas was an occasion for a feast, but not an extraordinary one. For the Quakers, who largely rejected Anglican traditions, Christmas was a day like any other. However, just as today’s American troops serving in foreign lands seek comfort in simple pleasures during the holidays, the 4th Pennsylvania battalion soldiers at Fort Ticonderoga heartily enjoyed basic comforts that reminded them of home.

By the end of November 1776, Ticonderoga was covered by winter’s first blanket of snow. The 3,500 men remained to garrison Fort Ticonderoga, Mount Hope, and Mount Independence under the command of Colonel Anthony Wayne watched wearily as Massachusetts and New York militia troops departed for home at the end of their terms of enlistment. Other Continental troops departed to join General Washington in the milder winter climate of New Jersey. Settling in for a long winter guarding Lake Champlain from attack, Colonel Wayne moved the men of his 4th Pennsylvania battalion into the sparse comforts of the Fort’s stone barracks.