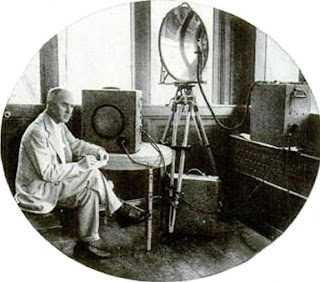 In late 1932, on a dark mountainside in the far southern Adirondacks, a group of scientists prepared for a groundbreaking effort in the world of communications. The plan was to conduct a long-distance, telephone-style conversation with their counterparts stationed 24 miles away on the roof of the General Electric Company in Schenectady. No wires were involved. The voices of those on GE’s rooftop would be carried by a searchlight beam aimed directly at a concave, 30-inch mirror on a hillside near Lake Desolation.

This particular effort was the brainchild of GE research engineer John Bellamy Taylor. It involved a unique process he called “narrowcasting” because the tight focus of the beam differed substantially from the growing technology known widely as “broadcasting.”

Earlier in the year, Taylor had likewise communicated from the navy blimp Los Angeles floating high above the GE buildings. The effect was accomplished by making a light source flicker in unison with voice fluctuations. A photoelectric cell received the flickers, or pulsations, and converted them to electrical impulses, which were then amplified by a loudspeaker. The term narrowcasting was apt—any interruption of the narrow light beam halted the transmission.

This new attempt in the Adirondacks challenged Taylor’s abilities, covering more than ten times the distance of the dirigible effort and spanning some rough terrain. While trying to place the mirror in the Lake Desolation area, engineering crews twice buried their vehicles in the mud. Another technology—the shortwave radio— was used to effect a rescue. 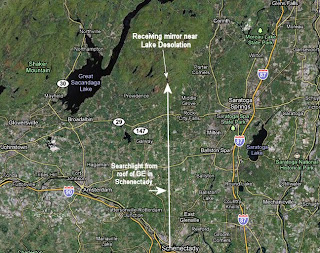 A second issue arose involving the visibility of the large light beam. From 24 miles away, the searchlight blended among the stars on the horizon. Instructions were radioed to blink the light, which immediately solved the problem. Further communications by radio allowed the proper alignment of the light and mirror. With everything in place, the big moment was at hand.

A member of the extensive media coverage took part in the experiment. As Taylor waited on the distant hillside, famed newspaper columnist Heywood Broun began to interview him from atop the GE roof in Schenectady: “Do you suppose it might be possible in 50 or 100 years to communicate with Mars over a light ray?” Taylor’s reply included a bit of humor. “It might be within the range of possibility, but one difficulty would be how to inform the Martians what apparatus to set up.”

While Broun’s voice rode the light beam, Taylor’s end of the conversation was sent by shortwave radio back to Broun at Schenectady, where it was received and then rebroadcast on AM radio stations. The two-way conversation was the first ever of its kind. In an area where few people had ever used or even seen a telephone, locals were suddenly talking across a beam of light. Old trapper James Link of Lake Desolation shared that “it’s getting mighty cold up here,” and two young women also spoke with Broun. It was a public relations coup for GE, and a powerful advertisement for Taylor’s wonderful innovation. The experiment was a resounding success, followed soon by other intriguing demonstrations.

A few months later, an orchestra played before a sole microphone high in New York City’s Chrysler Building. Pointing a beam of light at a lens in the window of a broadcast studio half a mile away, Taylor transmitted the performance to an audience of shocked listeners. Stunning successes like that would influence all future communications efforts in a variety of fields.

Among his many achievements, John Bellamy Taylor is credited with being the first ever to make light audible and sound visible, and with developing the first portable radio. Just how important was his work? The effects his discoveries had on radio, television, telephone, and other technologies are immeasurable. Due to the work of Taylor, Thomas Edison, and their contemporaries, the world was forever changed.