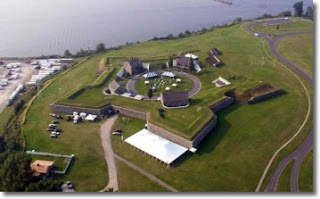 During the War of 1812, control of Lake Ontario was one of many issues considered critical by both sides. A key position for the British was Kingston, Ontario, about thirty miles north of the vital American base at Sackets Harbor. In an effort to establish domination of the lake, the two sites engaged in a shipbuilding race.

The British finished first and gained control, but American builders quickly completed three new ships (two brigs and the huge frigate Superior, larger than its British counterpart). Their launch required only weapons and rigging, which were en route from Brooklyn via Albany. In 1814, hoping to keep those vessels in port, the British sought to disrupt American supply routes. A prime target was Fort Ontario, located at Oswego on the mouth of the Oswego River.


On May 5, the British fleet launched an attack that was repelled by the Americans. On the following day, an intensified assault featured heavy cannon fire from the British. Eventually, the Americans lost the fort and some important armaments, but most of the valuable supplies had been taken upriver to Oswego Falls (now Fulton) for safe storage. The preservation tactic worked, and shortly after the Battle of Oswego, a plan was in place to resume moving war supplies northward to the waiting ships at Sackets Harbor.

Following the attack, the British withdrew to Kingston, but a few weeks later, they were at the Galloo Islands near Sackets Harbor, blockading any marine attempts at supplying this strategic site. Should the materials slip through, it would dramatically tip the scales in favor of the American forces. By monitoring the harbor, the Brits were preventing that from happening, ensuring their superiority on the lake.

A British attempt to destroy the Superior was foiled, and on May 2, the ship was launched. But it was hardly battle-ready, still lacking guns and rigging. Less than three weeks after the attack on Oswego, the critical supplies hidden at Oswego Falls were once again on the move. They had already traveled from Brooklyn to Albany, and then to Oneida Lake. Now, from Oswego Falls, it was time for the final, dangerous leg of the journey. 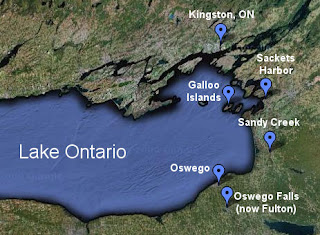 A land contingent paralleled the 19 American boats as they fairly sneaked up the eastern shoreline of Lake Ontario. At Sandy Creek, the boats were taken inland as far as possible while scouts checked ahead for the presence of British ships. It was a wise move, for the enemy was indeed lurking nearby. Shortly after, the British launched an attack, but in less than a half hour, the Americans had won a resounding victory known as the Battle of Big Sandy Creek.

Despite the win, it was deemed unsafe to risk sending the valued supplies any farther by water, lest they again fall under attack and be captured or destroyed by the British. Wagons, oxen, horses, and manpower were summoned, both from the military and from local residents. The plan was to move the important supplies the remaining distance by land.

The bateaux (boats) were unloaded, and soon a lengthy caravan laden with guns, ship cables, and other supplies was on its way to Sackets Harbor, about 20 miles north. Only one item was yet to be moved—a length of rope, albeit an important one—and it presented a real problem.

This wasn’t just any length of rope. It was intended as the anchor line and/or rigging for the USS Superior, the huge new frigate that could alter the balance of power on the lake. That meant this was a BIG rope. Most descriptions portrayed it as 6 inches thick and 600 feet long, weighing in at just under 5 tons.

No cart was big enough to handle its tremendous size and weight, but if it wasn’t delivered, the Superior would remain port-bound, and the Brits would own the lake. Ingenuity often yields solutions at such critical moments, but sometimes good ol’ elbow grease is the answer. In this case, it was a combination of the two, but the emphasis was clearly on the physical.

A section of the rope (referred to as a cable) was piled on a cart, and the remaining cable was strung out along the trail. Militiamen heaved it to their shoulders, and like one gigantic, ponderous snake, the cable began moving slowly northward behind the cart.

There are various accounts of the trip, and claims as to the number of cable-carriers range from 84 to more than 200. Some say that discouraged men skipped out of the nasty job after a few hours, and that locals stepped in, literally shouldering the burden. None of the stories differed on one count, though: participants were left badly bruised from the incredibly difficult ordeal. 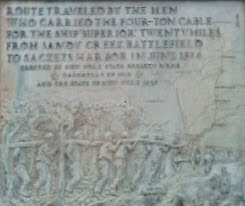 But, they did it! The cable arrived at Sackets Harbor on the afternoon of the second day. The tired men wore abrasions, cuts, and huge, deep-purple bruises as hard-earned badges of valor. At the close of their incredible 20-mile journey, “there was loud cheering the whole length of the cable,” as the men were greeted with music, drumming, flag-waving, and drink—and the princely sum of $2 each for their efforts.

They should have celebrated with a tug-of-war!

As soon as it was deemed seaworthy, the Superior turned the tables on the British, blockading their main shipyard at Kingston and helping establish American dominance of the lake. It was thanks in no small part to the “can-do” attitude exemplified by North Country pioneer folks.

Middle Photo: One of several plaques honoring the cable carriers.