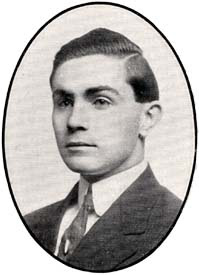 By most accounts, the Lincoln Tunnel is the world’s busiest vehicular tunnel (the type used by cars and trucks). It actually consists of three tunnels, or tubes, and accommodates about 43 million vehicles per year, or about 120,000 per day. It was opened in 1937, ten years after the Holland Tunnel (about three miles south) began handling traffic. And a North Country man was instrumental to the success of both tunnel systems.

Charles Watson Murdock, a native of Crown Point, New York, worked closely with some of the best engineers in American history, playing a key role in solving a problem unique to tunnels for vehicles with gasoline-powered engines.

Charles was born on February 11, 1889, to Andrew and Mary Murdock. After entering the Sherman Collegiate Institute (a prep school in Moriah), he attended Middlebury College in Vermont, earning a Bachelor of Arts degree, and then RPI in Troy, graduating in 1912 as a civil engineer. Following a stint with the New York Telephone Company, he accepted a position with the Public Service Commission, 1st District, New York City in 1913.

During the next several years, a pressing problem developed in Murdock’s field of work. The automobile had taken hold in America, and with the proliferation of cars in New York City, gridlock became routine. There were far too many vehicles on the road, clogging thoroughfares with major traffic jams, particularly at bridges.

Ferries helped, but the wait was long. The solution of adding more bridges and more ferries carried several additional problems. After studying the issues, experts decided that tunnels were the best option.

Plenty of tunnels had been dug in the past to accommodate trains, water pipelines, and subway systems. The advent of the automobile introduced new problems in anything but the shortest of tunnels. The gasoline engine emitted poisonous gases, primarily carbon monoxide. The problem vexing engineers was how to discharge those deadly gases from tunnels to make the air safe.

No method had yet been devised to fill long tunnels (like the planned 1.6-mile Holland) with safe and breathable air. Slow traffic, stalled cars, and accidents could keep citizens within a tunnel for lengthy periods. All the while, every vehicle would be pumping poisonous gas into an enclosed space, with deadly results.

From among several options, the method proposed by Clifford Holland was chosen. On his team of engineers was Charles Murdock, who was then employed by the New York State Bridge and Tunnel Commission and the New Jersey Interstate Bridge and Tunnel Commission. (Clifford Holland died just two days before the two tunnels from east and west were joined. The project was renamed in his honor.) 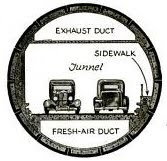 Several dozen structures requiring innovative and exceptional engineering skills have been called “the Eighth Wonder of the World.” Among them is the Holland Tunnel, “the world’s first mechanically ventilated underwater vehicular tunnel.” That long-winded description is very important—the Holland’s machine-powered air-handling system became the standard blueprint for automobile tunnels the world over for the next seven decades.

Charles Murdock was deeply involved in its design, development, and implementation. In 1921, he conducted subway ventilation tests at the University of Illinois. Further work—highly detailed, exhaustive experimentation—was done in a test tunnel created in an old mine near Bruceton, Pennsylvania, duplicating the Holland site. The data from those testing facilities formed a basis for the creation of the Holland Tunnel’s ventilation system.

In the process, the engineering team also developed and used the first reliable automated carbon monoxide detector (with kudos from miners and canaries alike, no doubt).

The giant tubes that formed the highway tunnels were separated into three horizontal layers. The middle layer handled traffic- the bottom layer conducted fresh air throughout the tunnel- and the top layer pulled the poisonous gases upward for removal.

The system was driven by four 10-story ventilation towers, two on each side of the river. Together they housed 84 fans of 8 feet in diameter—half provided fresh air, which flowed through slits in the tunnel floor, and the other half expelled “dirty” air and gases skyward. The system provided a complete change in the tunnel’s air every 90 seconds.

Should it ever fail, thousands of lives were at risk. For that reason, extreme safety measures were built into the system. Power to the fans was supplied from six independent sources, three on each side of the river, and each capable of powering the entire tunnel on its own.

Due to Murdock’s great expertise, he was later chosen to oversee the installation of the ventilation system on the Lincoln Tunnel. Fifty-six fans performed the air-handling duties, and twenty men covered three shifts around the clock, monitoring the carbon monoxide instruments. Motorists commented that the air they breathed in the Lincoln Tunnel was far cleaner than what they breathed daily in the city.

In 1938, the year after the Lincoln Tunnel opened, Murdock’s presentation, “Ventilating the Lincoln Vehicular Tunnel” was made before the American Society of Heating and Ventilating Engineers, setting the standard for similar tunnels around the world. 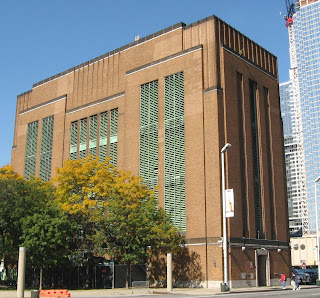 By 1947, ten years after the Lincoln Tunnel opened, Murdock’s work was praised as a modern wonder. It had operated perfectly for a full decade—none of the backup systems were called into use during that time.

Though he was known principally for his work on the Holland and Lincoln Tunnels from the 1920s through the 1960s, Murdock’s skills were called upon for many other large projects. He was a consulting mechanical engineer on the addition of second tunnels to four sites on the Pennsylvania Turnpike—the Allegheny, Blue Mountain, Kittatinny, and Tascarora tunnels.

Charles Murdock remained with the Port Authority of New York for more than 25 years. The Crown Point native is linked to some of the most important engineering work of the twentieth century. He died in Volusia, Florida in 1970 at the age of 81.

Photo Middle: The three layers in the Lincoln Tunnel tubes.