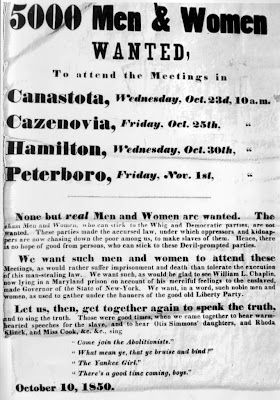 Milton C. Sernett PhD has asked Hugh C. Humphreys to join the presentation of the Abolition Lyceum IV: Slavery, Law, and Politics for the annual National Abolition Hall of Fame and Museum (NAHOF) event Saturday, October 22, 2011 at 10:30 a.m. in Golden Auditorium at Colgate University, Hamilton NY. This lecture is fourth in a series of five lectures chronicling the history of American abolition from the Colonial Period to the Civil War which Dr. Sernett has delivered each year.

Humphreys and Sernett team up to examine the intersection of politics in the debates over American slavery and abolition. They will explore the legal and political aspects of the debate over slavery by highlighting watershed events such as the Missouri Compromise of 1820, the Amistad Incident, the Great Fugitive Slave Convention held in Cazenovia in 1850, the political debate over the Compromise of 1850 and the struggles that took place in the Kansas Territory over the issue of &#8220popular sovereignty&#8221 and slavery. Other topics of interest will be efforts of abolitionists to organize political parties and the rise of Lincoln and the Republican Party. Humphreys and Sernett will also be talking about the debates over the Constitution, the emergence of political abolitionism, and the role played by significant figures such as Gerrit Smith, Henry Clay, Daniel Webster, and Abraham Lincoln. Humphreys will discuss the Dred Scott Case where the fate of Scott and his family went all the way to the Supreme Court. Several video clips will be shown.

Milton C. Sernett is Professor Emeritus of African American Studies and History, having taught at Syracuse University for thirty years. He has spoken widely on abolitionism, the Underground Railroad, and Harriet Tubman. His books include North Star Country: Upstate New York and the Crusade for African American Freedom- Abolition’s Axe: Beriah Green, Oneida Institute and the Black Freedom Struggle- and Harriet Tubman: Myth, Memory, & History. Sernett is a founder and a member of the Cabinet of Freedom of the National Abolition Hall of Fame and Museum.

Hugh C. Humphreys is a retired Madison County judge and currently teaches a course on abolition law at Syracuse University. Humphreys researched and published Heritage #19 on the Great Cazenovia Convention for the Madison County Historical Society. Humphreys is a founder and a member of the Cabinet of Freedom for the National Abolition Hall of Fame and Museum. He has generously shared his oratory, painting, and theatre talents with Peterboro heritage projects for two decades.

The Abolition Lyceum IV Slavery, Law, and Politics is twelve dollars at the door, or free with the Total Day Package for the annual NAHOF event. For more information and registration: www.AbolitionHoF.org, [email protected], 315-366-8101

This illustrated lyceum presentation will draw on images and text from the traveling exhibit panel &#8220The Politics of Slavery and Abolition&#8221 that is part of the traveling exhibit of the National Abolition Hall of Fame and Museum. All eight panels of the exhibit will be shown for the first time following the Lyceum.

The Traveling Abolition Museum will officially open to the public at 11:30 a.m. in the Clark Room in the James C. Colgate Building at Colgate University. Dr. Sernett created the text and assembled the visuals for the traveling “walls” to chronicle American abolition in a similar way that Sernett’s lyceum series has done. Scott Hughes managed the fabrication and the installations. The mobile museum has been made possible by generous donations from the American International College, Norman K. Dann and Dorothy Willsey-Dann, The Gorman Foundation, Ellen Percy Kraly, the New York Business Development Corporation, Dr. Milton C. Sernett and Janet M. Sernett, Maryann M. Winters, and the Upstate Institute at Colgate University. The public is encouraged to attend the free exhibit.