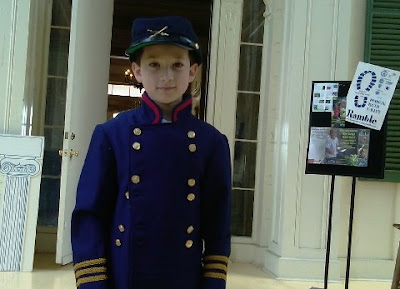 Growing exponentially in membership support from Westchester and Fairfield counties, the Jay Heritage Center (JHC) recently hosted its annual Fall Family Festival, celebrating American culture and traditions. Highlights included costumed tours of JHC’s Sesquicentennial Civil War Exhibit &#8220The Jays and the Abolition of Slavery&#8221 along with traditional music and activities for all ages.

The event was organized by JHC’s Young Preservationists, a group of parents committed to the adaptive reuse of John Jay’s landmark home as a community learning center for children and adults, a place furnished with lively ideas and people, not just furniture. The fresh vision of co-presidents, Emma Hanratty and Caroline Wallach had great resonance as over 1200 people showed up to applaud their efforts while munching on crisp autumn apples and sipping cider. The weather held as parents and kids painted pumpkins and ran 3 legged races in the old Jay meadow- the property thrummed with traditional folk tunes like Oh Susannah provided by the duo Cracked Walnuts. Nate the jackstock donkey was back courtesy of Tilly Foster Farm and reminded visitors that the Jay estate was once itself a working farm with plentiful crops and gardens. Farmer’s market offerings of pumpkin muffins and homemade jams were on hand thanks to Meredith’s Bread from Kingston while Cocoa out of neighboring Larchmont satisfied sweet cravings with artisanal chocolates and brownies. The place was filled with butterflies &#8211 both the winged wildlife that naturally adorns the landscape as well as vivid butterfly painted faces and balloon animals to take home courtesy of James Daniels.

Grownups had plenty to see too as veteran JHC archaeologist, Dr. Eugene Boesch, displayed the Paleo Indian and archaic woodland artifacts he has recovered from the grounds of this national treasure including a 4000 year old projectile point. Bruce Macdonald of Ashwood Restoration opened up his preservation workshop and explained the challenges involved in recreating mahogany spindles for the mansion’s 19th century staircase. At the 1907 Carriage House, families saw a sustainable dollhouse and learned that their footprints matter in a power point presentation on invasive trees and plants threatening New York State habitats. But many parents and grandparents were content to just sit in wicker rockers on the veranda to watch their children play and drink in the unequalled view of New York State’s oldest man-managed meadow a vista famously dubbed &#8220a time funnel&#8221 to the past.

The event was part of the Hudson River Valley Ramble weekend which celebrates American heritage in New York State. It also coincided with President Obama’s call to service for National Public Lands, encouraging volunteers all over America to get more involved in the parks they love like the Jay Property.

For more information on future Jay Heritage Center and Young Preservationist events and volunteer opportunities go to www.jaycenter.org or friend them on Facebook.

Photo: Jack Lundin sports Union blue like many of John Jay’s descendants did during the Civil War.