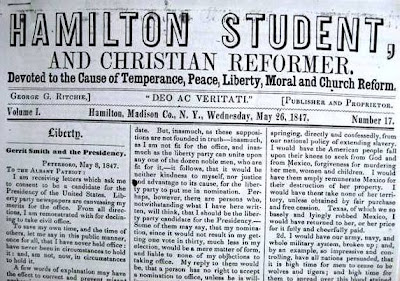 On the Hamilton NY campus from which he was expelled in 1847, George Gavin Ritchie will be honored in 2011. Ritchie’s expulsion from Madison University (now Colgate University) for his antislavery activities did not deter him from continuing to fight for abolition. Family, supporters, and others will gather in Golden Auditorium at 7 p.m. Saturday, October 22, 2011 to participate in ceremonies to induct Ritchie into the National Abolition Hall of Fame and Museum in Peterboro NY.

Nellie K. Edmonston & William E. Edmonston, Jr. write in their nomination of Ritchie to the Hall of Fame: “George Gavin Ritchie, editor of the first student newspaper at Madison University (at that time a Baptist Seminary- now Colgate University), was expelled for publishing his editorial, “Equal Suffrage and the Religious Press” (Hamilton Student, January 15, 1847) criticizing the voters and churches of New York State for not supporting equal suffrage for black males in the election of 1846. From this time forward his life was consumed with the cause of abolition.&#8221

Born in Scotland in 1820, Ritchie died at an early age of 33 (Frederick Douglass’ Paper March 25, 1853). In those short years Ritchie preached antislavery from many pulpits in New York and served on local, state, and national anti-slavery committees. The Edmonstons will explain much more of Ritchie’s life and legacy in a lecture on George Gavin Ritchie at 2:30 p.m. in Golden Auditorium, as part of the Upstate Institute Abolition Symposia during the afternoon of October 22.

The Ritchie induction to the National Abolition Hall of Fame and Museum (NAHOF) is the result of the first public nomination submitted to NAHOF. Nellie K. and William E. Edmonston have lived in Hamilton, NY for nearly 50 years. Both are retired teachers: Nellie was a Speech-Language Pathologist at the Sherburne-Earlville Central School and Bill is Professor Emeritus of Neuroscience/Psychology at Colgate University. Both have published in their respective fields- Nellie, professional articles and a language comprehension test for young children- Bill, professional articles and three professional books. From1989 to 2005 they had a small publishing company (Edmonston Publishing, Inc.) that specialized in original letters and journals of the American Civil War.

Nellie created the original and at the time only biographical article on upstate abolitionist George Gavin Ritchie as a presentation to the Hamilton Fortnightly Club in 1994 and as a contribution to the 1995 Hamilton Bicentennial Book. In 1997 Edmonston Publishing released Four Years in the First New York Light Artillery. The Papers of David F. Ritchie. David F. Ritchie was the son of George Gavin Ritchie, and it was through the publication of his Civil War papers that the Edmonstons became good friends with the Ritchie family.

With the development of the National Abolition Hall of Fame in 2005, the Edmonstons recognized the importance of nominating the local abolitionist and martyr to the cause, George Gavin Ritchie, whose story had lain in archival obscurity for nearly 160 years. Now his story will be properly preserved.