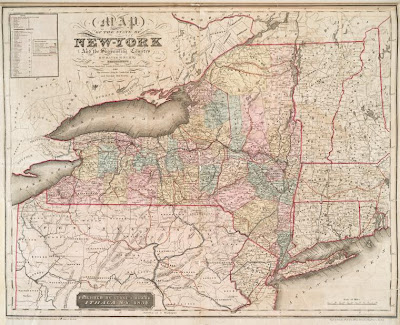 Regular readers of this online newsmagazine about New York State’s history should be happy to learn that we’re stepping it up a notch. The state has one of the richest histories in the United States, a tremendous opportunity for education, economic development, and creating social, cultural, and political links to our shared past.

This site’s aspirations are to provide what Bruce Dearstyne has called New York’s &#8220historical enterprise&#8221 an opportunity to collaborate and connect with history lovers and practitioners in order to help foster a sense of shared mission and purpose among New York historians of every stripe.

&#8220Too many programs are struggling with unclear missions, undefined audiences, and inadequate resources,&#8221 Dearstyne recently wrote on these pages. &#8220There are several state programs in the history arena, but coordination among them is limited and there is little sense of common purpose in the state’s history community.&#8221 I couldn’t agree more.

For the past several years I’ve edited New York History as a daily journal of news and events. That serves as a good base, but the more important goal is to explore the hard issues that trouble New York’s historical enterprise, from a variety of perspectives.

Regular readers may not be aware that I founded Adirondack Almanack in 2005. The site has been very successful by featuring some 20 contributors intimately familiar with life in the Adirondacks and drawing one of the largest online readerships in the Adirondack region. In 2010, Adirondack Almanack was honored by the Adirondack Mountain Club for &#8220outstanding talent and journalistic achievement in building an online, independent news source for the Adirondacks.&#8221 I expect nothing less for New York History. Hopefully, if you’ll join us, we’ll begin today to take our first small steps toward Dearstyne’s &#8220common purpose in the state’s history community.&#8221

Taking New York History to the next level will mean more commentary around public history issues, cultural resource economics, legislative efforts, and the concerns of the various disciplines (cultural history, political history, economic history, preservation, etc) the stat’s rich history deserves. It will require those with something important to say about New York’s historical enterprise to stand up and be counted.

Our audience are those interested in New York History, including lay people interested in learning more about the history of the state, history professionals interested in keeping up with what others around the state are doing, educators and academics interested in making connections to state and local history, and those concerned with historical cultural resource management more generally.

Beginning this week we’ll see new contributors and an increasing number of commentaries comparing and contrasting state history issues, exploring the problems of local historians, state historic sites, academia, and more. No doubt some toes will be stepped on, there will be some critical comments and commentary. Hopefully some old machinery will be taken apart to study is wheels and gears, to suggest some new fuels or encourage new operators to run that machinery in new ways.

Shortly we’ll I’ll be introducing our first new contributor, Peter Feinman, founder and president of the Institute of History, Archaeology, and Education. Over the next weeks and months we’ll be rolling out new contributors from a variety of disciplinary and regional perspectives.

I’m confident the site has great potential and I welcome those interested in contributing regularly or a single guest essay to contact me ([email protected]).

2 thoughts on “Taking New York History to the Next Level”